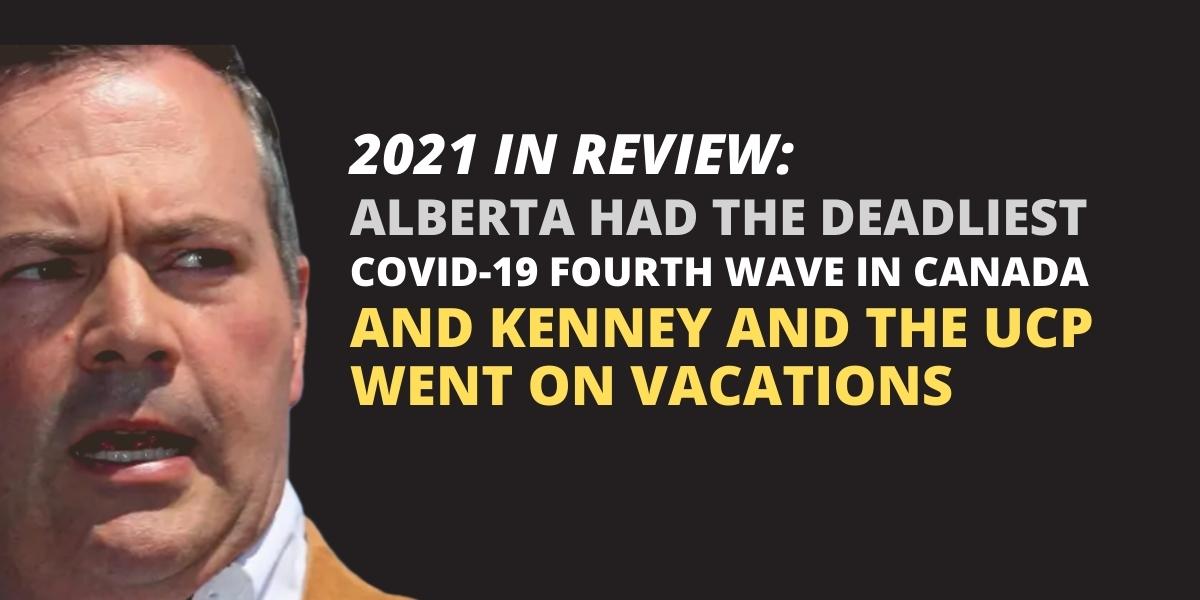 2021 in review: Alberta had the deadliest COVID-19 fourth wave in Canada and Kenney and the UCP went on vacations

In 2021, the Kenney UCP government continued to put their personal, political and ideological interests ahead of the interests of Alberta’s economic recovery and Albertan’s lives. The UCP’s biggest failure this past year was their COVID-19 response, or lack thereof, until public outcry would force them to follow the COVID-19 policies instituted by other Canadian provinces, a pattern we saw over and over, in addition to the theme of UCP vacations taking precedence over public health.

The Kenney UCP government came in with a plan to reward their donors, cut our public services and privatize health care and education. The funding cuts they made in the previous two years continued to erode our public services and they moved forward on privatization with outsourcing some health care services to private companies. They also continued to cut education, especially post-secondary institutions, further damaging the province.

The UCP also pushed ahead with another authoritarian move, Bill 81, an attempt to silence their critics while at the same time opening the floodgates of big money into the UCP’s bank accounts.

Let’s not forget that we rang in the New Year 2021 with news that the Alberta Municipal Affairs Minister Tracy Allard spent time in Hawaii on a family vacation, despite direction from both the federal and provincial governments to avoid non-essential travel during the COVID-19 pandemic. And then more news, more UCP MLAs and staffers went on vacations abroad, Hawaii, Mexico, the UK (where a variant was happening). At first, Kenney wouldn’t sanction these travellers but soon, in the face of the public outcry and the trending hashtag #ResignKenney, Kenney relented and Albertans who demanded consequences finally received them with the resignations of Allard and chief of staff Jamie Huckabay as well as the demotions of MLAs Jeremy Nixon, Jason Stephan, Tanya Fir, Pat Rehn, and Tany Yao.

The best summer ever

At the end of May, Kenney announced his three-stage "open for summer" plan, a strategy tied directly to vaccination and hospitalization numbers that would see all public-health restrictions lifted by July. Why? "We are optimistic that we'll enter Stage 3 by early July," Kenney said. "And what a great day that will be. Events like K-Days and Calgary Stampede can proceed at that point with full participation." This was key because the Calgary Stampede provides important fundraising opportunities for the UCP. The UCP started talking and tweeting about the “best summer ever” and how COVID-19 was over and the parties were on. UCP insiders kicked off the party season in June, when Alberta’s premier and some of his cabinet ministers were seen dining on the balcony of the so-called Sky Palace, a dinner in violation of the COVID-19 restrictions.

By the end of July, Kenney had even removed isolation requirements for Albertans who test positive for COVID-19. As July turned into August, COVID-19 numbers started to climb, the medical community started to issue warnings, and education advocates started to demand a safe plan for a school reopening but Kenney was nowhere to be found. By the time we hit September, Kenney had been absent for 23 days as COVID-19 numbers surged, providing no leadership during the health crisis. To help Albertans, a group of doctors started regular COVID-19 briefings.

When Kenney returned from his vacation, Alberta was on a deadly path of a COVID-19 fourth wave. The public, including twelve Alberta mayors, called for a COVID-19 vaccine passport, as other provinces were implementing, but Kenney did not want a vaccine passport and stalled with tactics like $100 gift cards for vaccines as incentives for those who had not yet gotten their vaccinations. Masks were brought back and eventually a vaccine passport system was instituted, although the UCP moved slowly and insisted on calling it a vaccination record.

Alberta’s COVID-19 situation went from bad to worse. By mid-September, things were so dire, it looked like Alberta's health care system was collapsing right in front of our eyes and the AFL and four unions representing thousands of health care workers called on Kenney to ask for military and Red Cross help. Kenney and the UCP didn’t act, they were waiting until the federal election was over as it appears they didn’t want to harm the Conservatives’ election chances.

The UCP government did finally ask Ottawa for COVID-19 health care help and the fourth wave has now subsided, however, it has left exhausted, burned-out health care workers and about 15,000 cancelled surgeries to catch up on.

In addition to the toll the UCP’s mismanagement of COVID-19 had on front line health care workers, the UCP government’s 2021 budget promised more health care privatization with an announcement to increase capacity at private clinics. Hundreds of jobs were and will be lost because the UCP government's privatization push closed AHS in-house laundry services and awarded the contracts to a private company.

In the summer of 2021, a big issue of bed closures all around the province, including ER beds, started to emerge, due to understaffing. A shortage of paramedics and other emergency staff, in addition to funding cuts and centralizing services for ambulances began causing an alarming amount of “code reds” – when no ambulance is available to respond when someone calls for help.

As in health care, the funding cuts and freezes to education began in 2019, as did the ideological curriculum reviews. The UCP continued to cut education and attack teachers in various ways. Recently, Calgary did hire 200 temporary teachers, but the 16-week positions aren't nearly enough to replace the estimated 1,000 teachers and educational assistants that were lost during pandemic UCP cutbacks.

The UCP Budget 2021 included a 1.4 per cent decrease in funding for advanced education. Alberta’s post-secondaries were also slated to lose 750 full-time equivalent jobs in 2021-22, according to the budget. The University of Alberta seems to have borne the brunt of the cuts, president Bill Flanagan said that the school will be facing a $60.1 million cut, almost one half of the total post-secondary slashing down by the UCP provincial budget. Tuition increases, for example domestic University of Calgary students could see tuition hikes as high as 32 per cent in fall 2022, with even steeper increases proposed for international students. Due to UCP funding cuts, job cuts and wage rollbacks were faced by many Alberta post-secondary institutions.

On November 15, 2021, the Kenney UCP government finally joined most other provinces in signing on to the Trudeau government’s $10-a-day national child care plan. This victory belongs solely to those who made it happen, citizens working together in civil society, not those, like the UCP, who did their best to delay and obstruct it. The more than $3 billion federal transfer to the province sets the stage for big reductions in parent fees, a major expansion of not-for-profit and public child care services, and solutions to the ongoing problem of recruiting and retaining qualified staff in the sector. However, how the Alberta UCP government will fulfil its obligations is still not clear.

One of the UCP’s most heartbreaking cuts to social programs was the closing of the supervised drug consumption sites, which has continued to lead to the deaths of many Albertans struggling with addictions. In 2021, the UCP also cut funding for income support by $66 million, which included a program supporting people with injuries and disabilities who can't keep or find full-time work. The UCP also cut nearly 50 per cent of the community facility enhancement program (CFEP), which provides matching grants to help build and upgrade public-use facilities to community associations.

In the parks and environment category, last year, the UCP canceled decades-old environmental protections that made open-pit coal mines difficult to develop in Alberta. But the ensuing public outcry was intense, prompting a backpedal from the government and a promise to reinstate the protections in the Rockies until proper studies had been conducted. The two anticipated provincial reports around open-pit coal development have been delayed. Additionally, public frustration and confusion surrounded the UCP government's newly introduced Kananaskis Country conservation pass, especially since it exempted an area often used by off-highway vehicles (OHVs).

And in October, the UCP government’s $3.5 million public inquiry into foreign-funded anti-energy campaigns found no evidence of legal wrongdoing by environmental groups.

The controversial inquiry, led by commissioner Steve Allan, was an integral part of the UCP’s $30 million Canadian Energy Centre, or Alberta’s ‘Energy War Room,’ which is aimed at fighting “anti-Albertan” activities, seemingly taking offence to any criticism of the oil and gas sector. However, Allan wrote that participating in an anti-Alberta energy campaign does not mean an organization is “against Alberta.”

The war room also made news in March for taking aim at a children’s Netflix movie, Bigfoot Family, a children’s cartoon film, which has been described by Alberta Premier Jason Kenney as a film that portrays oil and gas industries plotting to kill people.

The Kenney UCP government passed Bill 81, the Elections Statutes Amendment Act, an undemocratic and unconstitutional attempt to silence workers by restricting the Alberta Federation of Labour and others’ ability to criticize the UCP government. It is also designed to help Kenney and the UCP win the next election by opening the door for unlimited money from secret donors and allowing individuals to purchase UCP memberships for other people without their permission.

Also in 2021, because of the UCP’s Ensuring Safety and Cutting Red Tape Act, changes to the OHS Act were proclaimed and OHS Code changes came into effect. These changes to Occupational Health and Safety rules reduce the effectiveness of health and safety committees and limit a worker’s ability to refuse unsafe work by changing the language, adding extra steps to the process and removing worker representation in the investigation. Nurses and other frontline health care workers, dealing with COVID-19, also felt the effect of the UCP limiting presumptive coverage for psychological injuries.

Stand up to Kenney

The UCP damage to Alberta continues, there are too many examples to list here, so please check out our Kenney's Cuts Tracker. And if we missed anything, please submit a cut. Join us in the fight to Stand up to Kenney.