Documents show that Alberta, unlike other provinces, is leaving millions on the table that should be going to workers, says AFL

EDMONTON – Unlike all other provinces, the Kenney government has spent only a tiny fraction of the money available to it through a federal cost-shared program to support essential workers during the COVID-19 pandemic, according to federal government documents obtained by the Alberta Federation of Labour.

“Premier Kenney often describes front-line workers as heroes, but these documents show that his actions don’t match his words,” said Gil McGowan, president of the Alberta Federation of Labour. “Our province’s essential workers are stretched to the limit, but the Kenney government still refuses to recognize their contribution by delivering wage supports in line with other provinces.”

In May, Prime Minister Justin Trudeau announced a $4 billion cost-shared program to provide wage supports and top-ups for essential workers. The $3 billion federal commitment is contingent on provinces and territories providing $1 billion. Documents obtained by the Alberta Federation of Labour show that of the $347 million federal dollars available for Alberta, only $12 million was allocated based on Alberta’s tiny contribution. The documents show other provinces and territories have contributed most or all of their share of the cost-shared program. Alberta, on the other hand, has paid out only 3.5 per cent of its share. This has meant that more than $300 million in federal money ear marked for frontline worker in Alberta has yet to be released.

“Alberta’s essential workers are missing out because of UCP negligence and foot dragging,” said McGowan. “It’s important to understand that this is a cost-shared program between the federal government and the provinces. If a province doesn’t provide it’s share, the federal money doesn’t flow. That’s what’s happening here in Alberta. Don’t let the Kenney government tell you they’re ‘still negotiating with the feds.’ No other province is having any problems. The UCP here in Alberta are the ones who are holding things up by not kicking in their share. If the province provided its portion of funds for essential workers, then the money available to essential workers in Alberta would total more than $463 million.”

“The Kenney government is an outlier among Canadian provinces when it comes to pandemic pay,” added McGowan. “Other governments are paying far more to top-up wages for essential workers, and they’re providing it to a far wider range of workers. Even provinces a fraction our size of Alberta are doing more. To add insult to injury, here in Alberta, our health minister Tyler Shandro made a big point in the spring, saying how his government would reward health care aides for their service. Sadly, that was clearly nothing more than a media stunt. It’s another UCP promise made and broken. Alberta’s essential workers deserve better.”

“The bottom line is that the essential worker wage top-up program has been marred by misinformation and lack of leadership here in Alberta,” concluded McGowan. “The Kenney government can and should do the right thing and access these funds now by stepping up to provide Alberta’s portion of the funds.”

The AFL obtained information from the federal government through a question on the Order Paper put forward by Member of Parliament Peter Julian from the NDP Caucus. The information shows the funds allocated and the funds transferred for the essential workers program.

The federal government allocated its $3 billion commitment and most provinces and territories were transferred most or all of their share.

According to the document, Alberta could receive $347,769,000 in federal funds, but was transferred only $12 million (or 3.45 per cent) based on the Kenney’s government’s cost sharing. 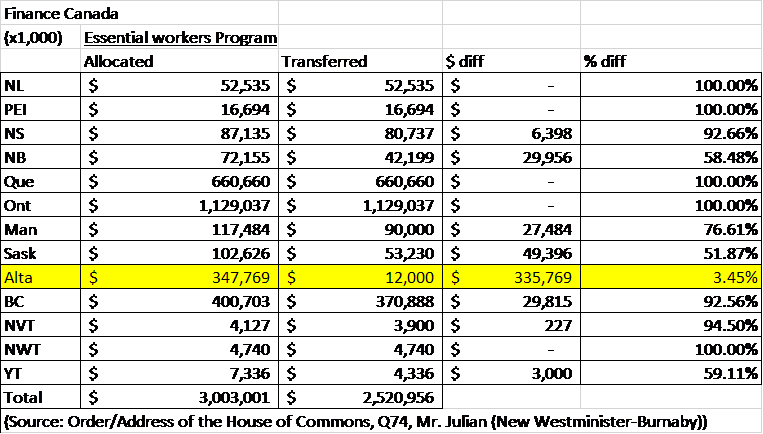