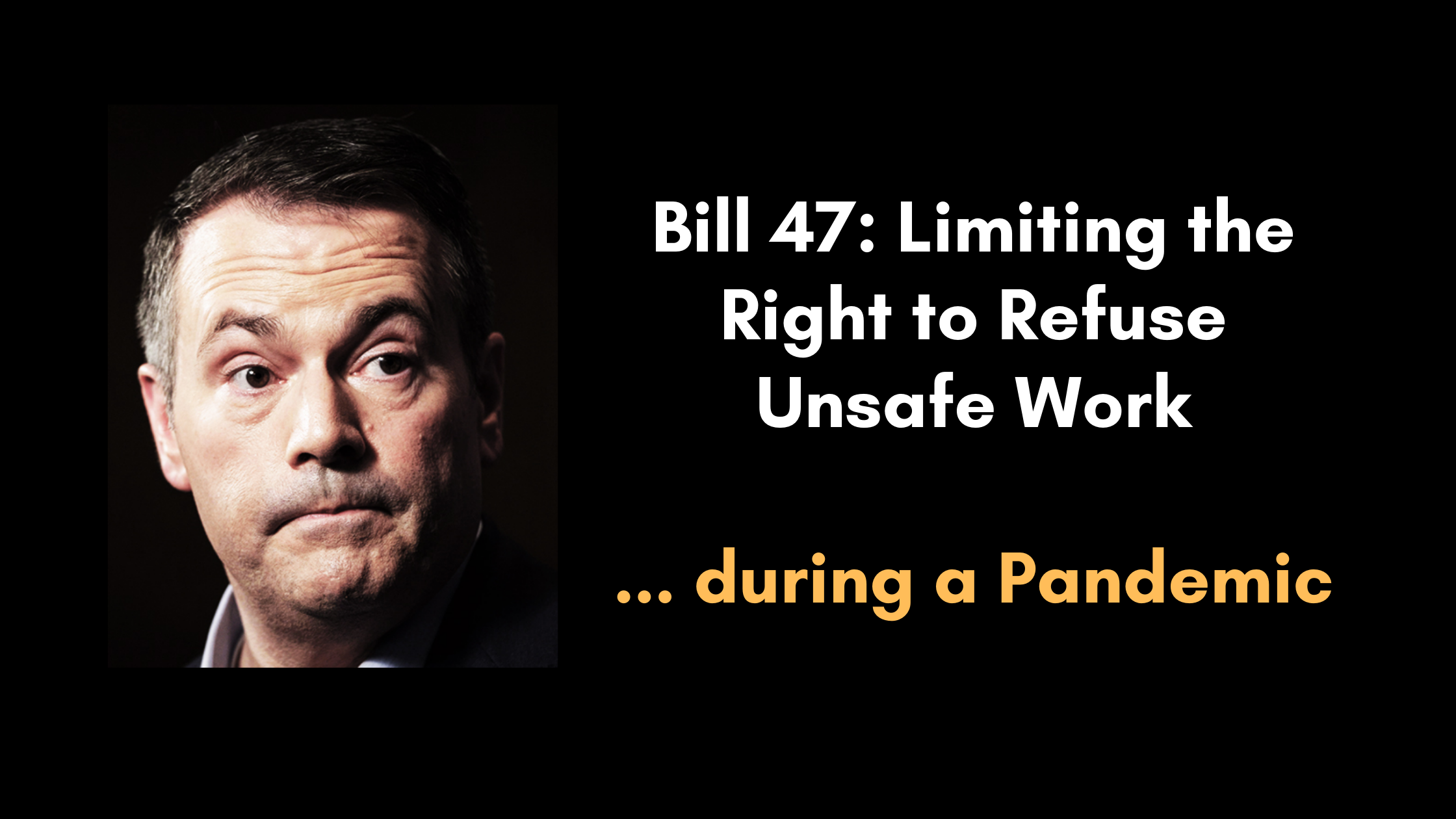 The fourth in a series of blogs on workplace health and safety in Alberta.

Any respectful workplace health and safety system, one that actually ensures workers make it home safely at the end of their shifts, includes three fundamental rights for workers: the right to know, the right to participate and the right to refuse unsafe work.

The Right to Refuse Unsafe Work

The final key right, the last check and balance, the last chance to making sure that workers make it home safely after every work shift, is the right to refuse unsafe work. If a worker is not able to refuse unsafe work – without being punished by their employer – it frankly does not matter how much they know or how much they have been able to participate in the workplace safety. The right to know is the last opportunity to stop unsafe work before someone is hurt or worse, killed. By now, it should come as no surprise that Bill 47, the so called Ensuring Safety and Cutting Red Tape Act makes it harder for workers to refuse unsafe work and makes it easier for bad employers to punish workers who try to use this right.

There are now three separate points that must happen in order for a work refusal to stand. The first is that the unsafe work must include an “undue hazard” which implies that some hazards are fine, while others are not. The second is that the undue hazard must pose a serious threat. This leaves open the interpretation that a worker cannot invoke the right to refuse for any danger that is not considered serious – which is not defined in the legislation. The third point is that the hazard must also pose an immediate threat. This change leaves open issues such as COVID-19 or asbestos that may be considered dangerous but not exactly as immediate. These changes are opposed to the previous legislation which simply needed a worker to have an honest belief that the work constitutes a danger to themselves or another person.

The UCP have introduced a new process for investigating potentially unsafe work if a worker uses this right. This new process involves the employer being the only person who investigates a potentially unsafe working condition. In the previous legislation, the worker who refused, along with a member of the joint occupational health and safety committee or another worker, would be involved with the investigation. Having another person there, especially another worker, was an important step in ensuring the initial worker was not completely isolated throughout this process. It also helped ensure that the worksite parties were on the same page and served as a chance not only to correct an unsafe working condition, but also to offer education when it comes to occupational health and safety matters.

Lost Compensation During a Refusal

The UCP have also taken away protections for workers who refuse unsafe work to be penalized with lost wages and benefits. Under the new UCP rules, employers only need to assign a worker, who refuses unsafe work, if work is available and it is at the same pay rate the worker had before. In the previous legislation, a worker refusing unsafe work was ensured they would receive the same benefits and wages, although they could be assigned to other duties. Now, if no work is available, according to the employer, then the worker who refuses unsafe work, in all likelihood, could be sent home with no pay.

No Longer Notifying Other Workers of a Refusal

Weakened Right NOT to be Disciplined

The UCP have also made changes for when workers use any of the rights under the OHS Act, including the right to refuse unsafe work. Now workers who use these rights, and are punished by their employers, have to file a claim to an OHS Officer within 6 months. The OHS Officer is also able to dismiss any of these claims, without even starting an investigation, if they think the complaint is trivial or was filed with improper motives.

The UCP have also changed wording in the OHS Act from ‘discrimination’ to ‘discipline’ when a worker is punished by their employer for refusing unsafe work. This change is far reaching as the range of actions considered discriminatory is much wider than the range of actions considered disciplinary. This means that employers may have a greater range of legal retaliatory measures to use against employees that invoke their right to refuse unsafe work, such as changing their schedule or hours and work assigned, unless such changes are to the degree that they could be seen to be disciplinary.

Downloading Health and Safety Enforcement on to Unions

Bill 47 is Weakening every Health and Safety Right

Not one single right that workers have, under all the workplace health and safety systems in Canada, was left untouched by the UCP changes. Every single right has been hollowed out, and in some cases, what remains is vague language which is difficult to enforce. This legislation makes all worksites and workplaces potentially less safe, and provides plenty of ways for bad employers to take advantage of workers and cut corners. All workers in Alberta deserve safe worksites so they make it home at the end of a shift.

This is part of a series looking at Bill 47. Click here to read the first, second and third in the blog series. In the next blog we will look at how the UCP changes impact the Workers Compensation System.