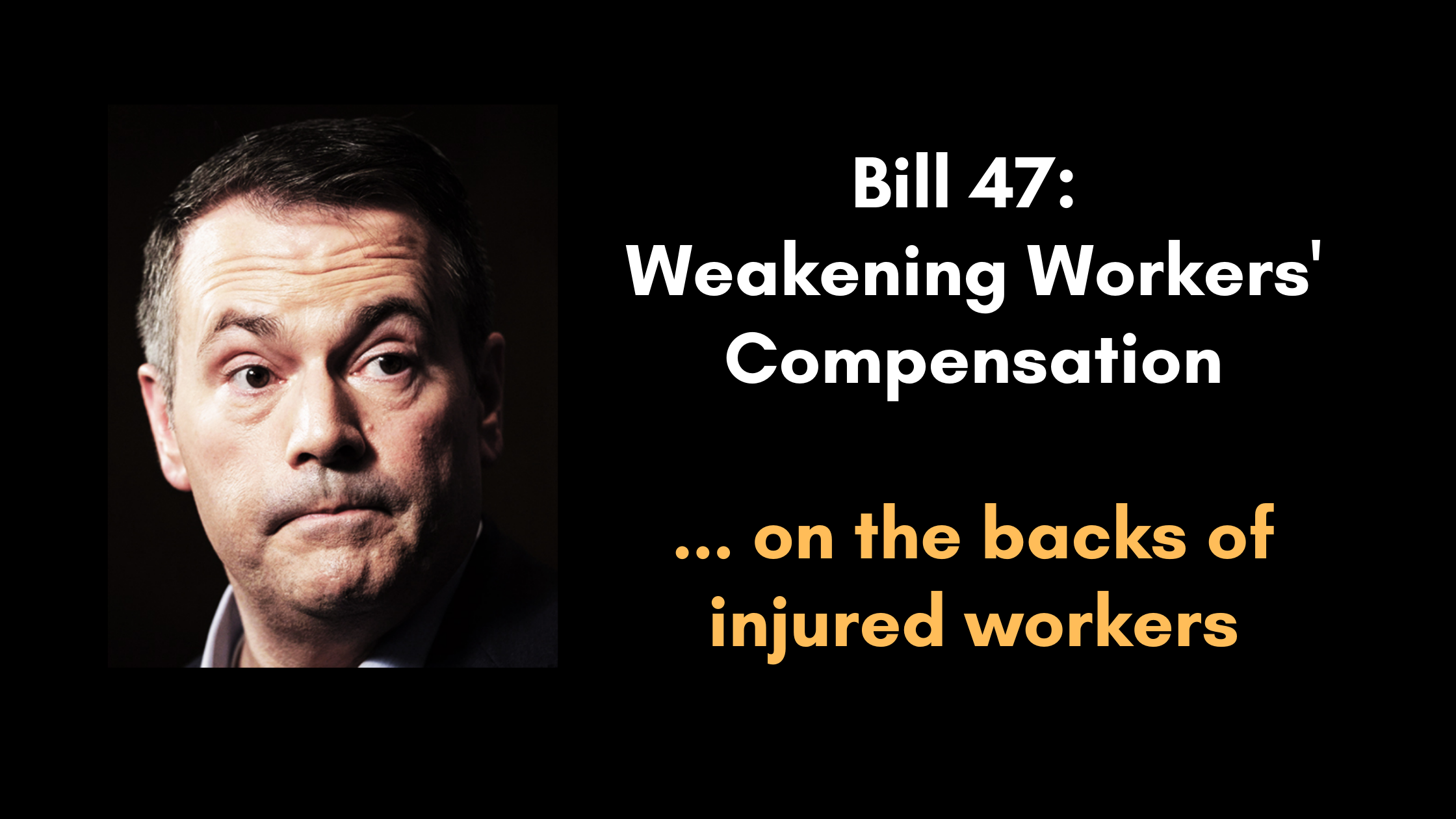 Bill 47: Weakening Workers’ Compensation on the Backs of Injured Workers

The fifth in a series of blogs on workplace health and safety in Alberta.

When all other workplace safety systems have failed and a worker is injured or killed on the job, it is the role of the workers’ compensation system to make that worker “whole” again. For injured workers, this includes wage and benefit loss replacement, and helping them heal so they can get back to their jobs. In the case of a workplace fatality, it means compensation and support for spouses and dependents.

The UCP have used Bill 47 the so called Ensuring Safety and Cutting Red Tape Act to not only make worksites less safe by cutting OHS, but it also makes it more difficult for injured workers to get WCB benefits, makes it easier to kick injured workers off benefits and focuses on saving employers money on the backs of injured workers.

Harder to get WCB Benefits

One of the biggest changes the UCP made to workers accessing benefits is cutting off certain workers from presumptive coverage for psychological injuries. Prior to the UCP changes, any workers who experiences a traumatic event (or series of events) at work, and is diagnosed by a physician or psychologist as having a psychological injury, it was presumed the injury happened at work. If an employer could demonstrate the injury did not happen at work, the worker would not receive coverage for this injury.

Under the new UCP changes, only certain frontline workers are given presumptive coverage, specifically firefighters, paramedics, police and peace officers, and emergency dispatch workers. All other workers have to argue to have their injuries compensated – even if they go through the exact same traumatic experience along with these front-line workers.

The UCP have gone so far as to brag that this change alone will take an estimated $230 million from away from workers over the next 3 years.

The UCP have also introduced a number of changes in legislation that limit the benefits injured workers can access. This includes putting in a cap on the wages they will cover and then putting in a max percentage of the cap that will be paid out to workers. For example, the cap (which is going to be set by the WCB Board) could be $80,000, and an injured worker would only receive 90% of that cap. This change disproportionately hurts workers with higher incomes in Alberta including those that work overtime and some of the workers in oil and gas fields. The UCP have bragged this change will cost workers an estimated $33 million next year alone.

The UCP have also taken away the legislation that requires benefits paid to injured workers in Alberta rise with the cost of living each year. The UCP are going back to the old model of having the WCB Board set any potential increases and having the ability to give no increases at all. This change is especially hard on workers just starting their careers who are seriously injured at a job and who are never able to work again. The longer a worker is on a WCB claim the greater drop they will see in how far their money can go. The UCP have also bragged that this will cost workers an estimated $240 million in future compensation.

$273 Million from the Pockets of Injured Workers

All of these changes impact workers who the WCB agrees have an injury caused by a workplace. Together, these changes take $273 million from the pockets of injured workers. Since the injuries that this money covers do not disappear, the costs are shifted to injured workers, their families and communities.

Loss of Health and Dental Coverage

The UCP have made other changes to cut injured workers off once they are on WCB. These changes include no longer requiring an injured worker to be covered under their employer’s health and dental coverage. This additional coverage is part of a worker’s total compensation and should not be parsed out from their direct wages. Also, some injured workers have other health conditions that are separate, but affect, their workplace injury. To cut off a worker from affording their heart medication, which they need to live, at a time they are unable to find other employment, just delays their overall recovery and puts their health at further risk because they were injured on the job. This change also impacts a worker’s whole family, who may also be dependent on the additional health and dental coverage for their own illnesses.

Employers No Longer Required to Re-hire an Injured Worker

Another fundamental change the UCP are making is getting rid of the requirement for an employer to re-hire an injured worker back into their former position. This change was recently introduced, but was incredibly meaningful for workers, as it meant that WCB system was actually dealing with a disturbing trend of a minority of employers refusing to re-hire injured workers. For these injured workers they had to rely on the Human Rights system in Alberta, which currently had a wait time of approximately 2 years for a case to be heard. By the government’s own estimates, only 10% of employers were not helping to return workers back to their jobs. It is frankly ridiculous that we would create a government policy to allow 10% of bad employers to continue with a bad practice and further incentivize other employers to start this bad practice. Workers that are left behind harms all of us, not just workers, but also our economy, our communities and our families.

No Fair Practices Office – No Support for Workers with Appeals

The UCP proposed legislation now gets rid of the Fair Practices Office. This Office was set up to provide independent help to workers and employers when navigating the WCB system and also ensuring the system is accountable for the purposes it was designed. It was important to have this help be external to WCB so that it could maintain objectivity in the process and provide the best advice possible for everyone. The UCP changes will mean scrapping this office, and replacing it with one person who is accountable to the WCB Board. These changes will likely result in the illusion of help for workers and employers to navigate the WCB system and the illusion of accountability.

Not only will injured workers have less help to appeal their cases, but they will also have a shorter timeframe in which to appeal. Instead of allowing 2 years to appeal a case, the UCP are legislating that a worker only has 1 year to appeal.

Easier to Cut Workers Off Benefits

The UCP have also added in a number of ways that WCB can cut injured workers off from benefits and compensation. The UCP are now allowing WCB appeal bodies to cut off workers from any composition during the appeal process. Also, if a worker does not fully cooperate with a vocational or rehabilitation program WCB can suspend or reduce their benefits and compensation. Although this may sound reasonable, it means that workers who work evening or night shift because they work around their partners schedule to care for children, for example, can be told they must show up to these programs any time during the day regardless of the fact that they will require child care. There have also been past issues where there is a disagreement between WCB and a worker’s own physician(s) on the best rehabilitation plan, but now if the worker pushes back against WCB, they can be cut off from benefits.

Saving Employers Money on the Backs of Injured Workers

The UCP are also making a number of recommended changes for the WCB, including reviewing their policies around the funding of their Accident Fund. The Accident Fund is where all WCB premiums are paid into and what is used to fund injured worker compensation and benefits. Because of a history of claims suppression, Alberta is in the unique position compared to many other provinces to often have a “surplus” in their Accident Fund. Past practices have determined the fund should always have some “surplus” to keep up with worker injuries and ensure the program is sustainable.

In the past, this surplus funding has gone towards programs that help enhance WCB and also worksite safety in general – since this is what the money was intended to do anyways. Some of these activities include research into common workplace injuries and best practices to help worker recovery; and also research into connections between certain work and certain injuries to better understand them and even injury prevention research.

Instead, the UCP seem to be suggesting by their own documents that it will be best to return this money to employers instead of focusing it on worker health, safety and recovery. Any money saved in this manner is money taken away from injured workers and helping to prevent workplace injuries.

This is part of a series looking at Bill 47. To see previous blog posts focused on the workplace health and safety see the first, second, third and fourth in the blog series.