Albertans are actually getting a good deal when it comes to the wages and salaries of our public-sector workers. This might come as a surprise to many Albertans after decades of spin and misinformation from conservative politicians and think tanks.

A closer look into the MacKinnon report shows the UCP government is misleading Albertans and statistics buried in the report prove it! Albertans are paying less for public-sector wages than most residents of other provinces.

The MacKinnon report was released in August 2019, from the Blue Ribbon Panel formed to provide political cover for the Kenney government’s plans for deep and unpopular cuts and privatization to public services.

The Panel was led by Janice MacKinnon, a former Saskatchewan Finance Minister, who once wrote that “Spending cuts inevitably hurt the poor more than the rich.” But was also responsible for draconian cuts to the public service in the 1990s in Saskatchewan.

The Alberta Federation of Labour questioned MacKinnon’s independence after we found that the Kenney government wrote articles on her behalf (and published under her name) extolling the need to make deep cuts.

The MacKinnon Panel report on Alberta’s public-sector compensation strings together factoids that are somewhat independent of one another. They use partial information and often lack context, but that’s by design to make the argument that solutions to a budget deficit are cuts and privatization.

Here’s one of those factoids:

“Relative to other provinces, Alberta’s total wage and salary expenses per capita (2018) were $918 compared to $698 in British Columbia, $609 in Ontario and $1,211 in Quebec,” writes the MacKinnon Panel in the report (page 45) and includes this handy graph. 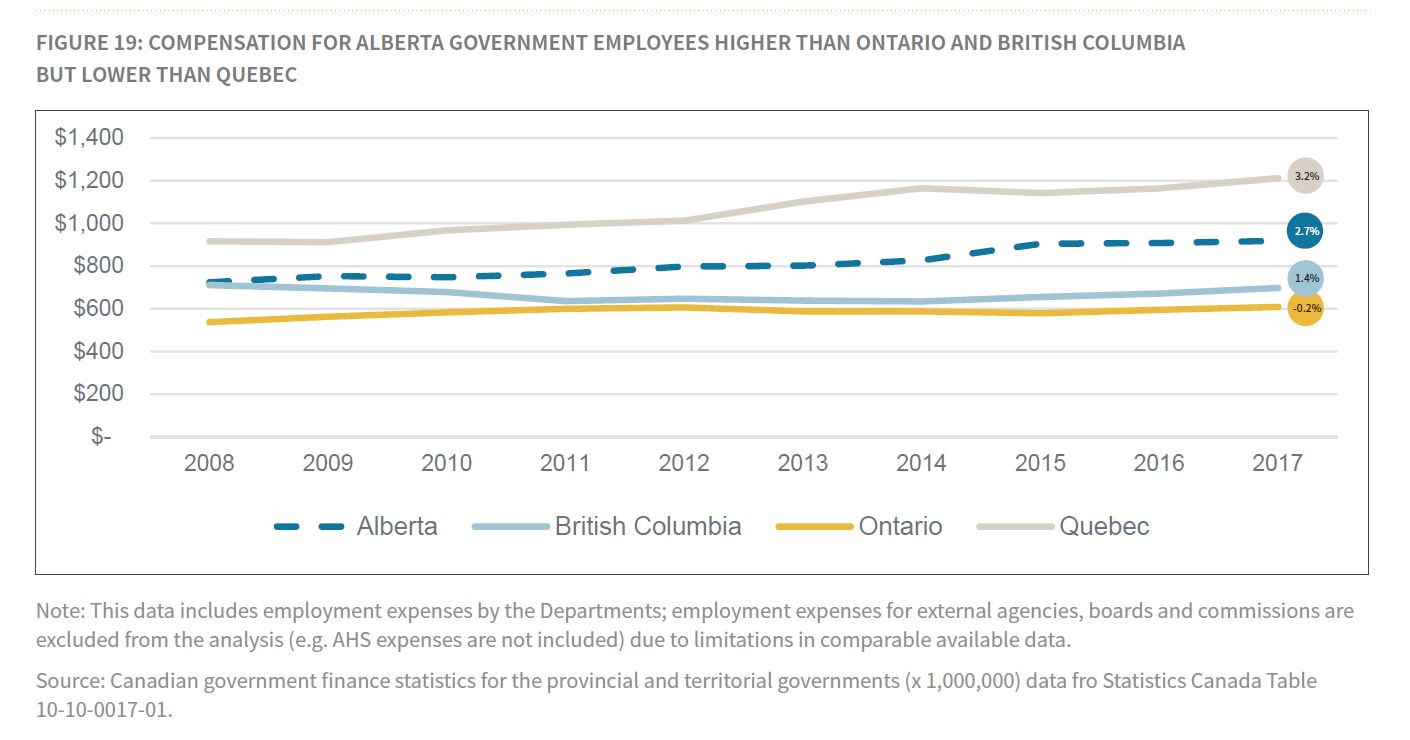 Let’s unpack this a graph a bit: this is “total wage and salary expenses per capita,” meaning what an individual resident of Alberta, B.C., Ontario, and Quebec spends on wages and salary for government employees. It is a measure of what an individual resident spends on compensation (wages and salaries) for government workers. And these are ‘core’ government workers, not nurses (paid through Alberta Health Services) or teachers (paid through school boards) – more on this later.

This shows that Alberta’s public-sector wage and salary bill is not out of whack from other “comparable” provinces: higher than B.C. or Ontario, but less than Quebec. Basically, we’re middle of the pack on a per-person basis, relative to comparable provinces.

The MacKinnon Panel chose B.C., Ontario, and Quebec as comparable provinces because Alberta is close to the same size in terms of population, we’re told.

The data comes from Statistics Canada, which shows “Canadian government finance statistics for the provincial and territorial governments,” so we can recreate the Panel’s work, although there are some minor discrepancies as population and expenditure figures get updated over time.

KPMG provided this data to the MacKinnon Panel and the general public – you can review it here on page 23 – but they neglected to include all provinces. Curious! 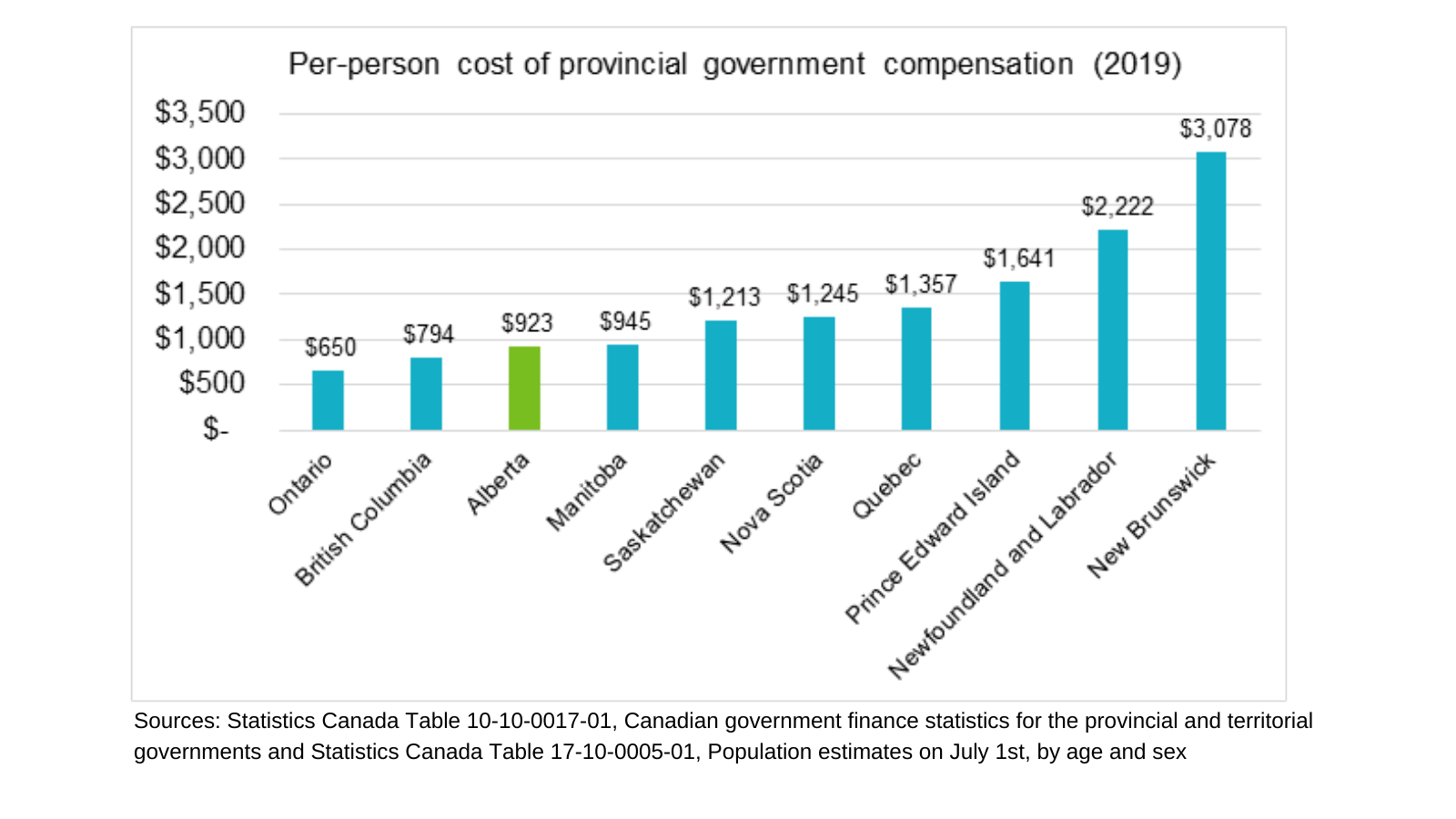 When we include all provinces, we see Alberta is not the highest cost jurisdiction for government compensation. Not even close. In fact, by this measure, Alberta is one of the least expensive provinces when it comes to per-person spending on public-sector compensation.

Recreating MacKinnon’s work and including all provinces, we can see that Alberta’s per-person spending on public-sector compensation for core government employees is near the bottom of the pack. Your average Saskatchewan resident, for example, paid about $300 more than an Albertan for wages and salaries for government workers.

Finance Minister Travis Toews referenced these statistics in his 2019 Budget Speech: “In keeping with the MacKinnon report recommendations, our goal is to bring Alberta government wages in line with other provinces.”

By the MacKinnon Panel’s own numbers, the amount Albertan’s spend on government wages is already in line with other provinces. In fact, by this measure, we’re underspending on public services.

Statistics Canada also has stats for the salaries and wages for health care and social service workers. 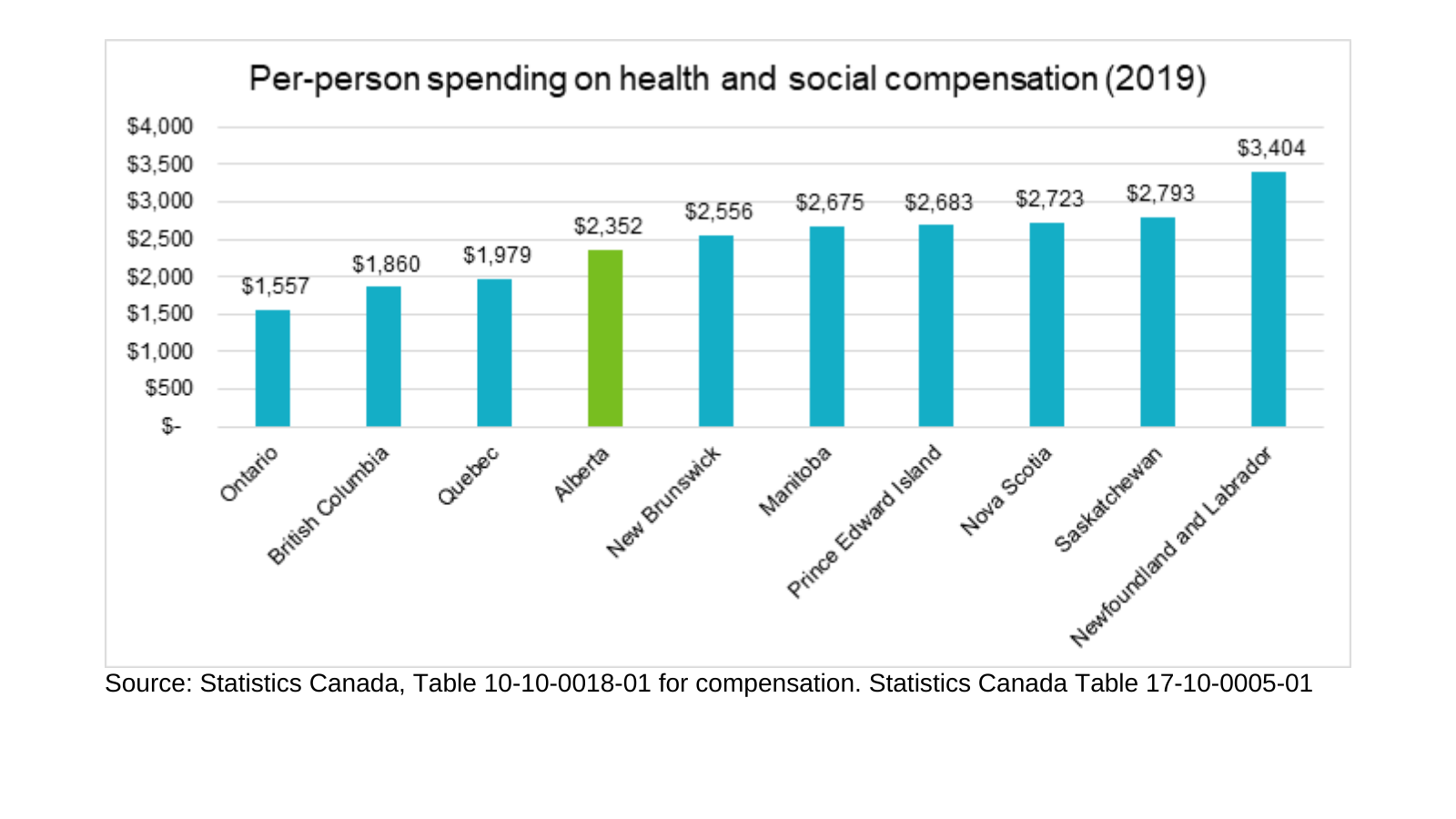 The MacKinnon Panel and conservatives alike love to tell Albertans that our nurses and other health care professionals’ salaries are out-of-whack, but that’s simply not true when you look at the total wage bill by population, which is what we’ve done here.

Statistics Canada also has data for compensation for public university and college workers. 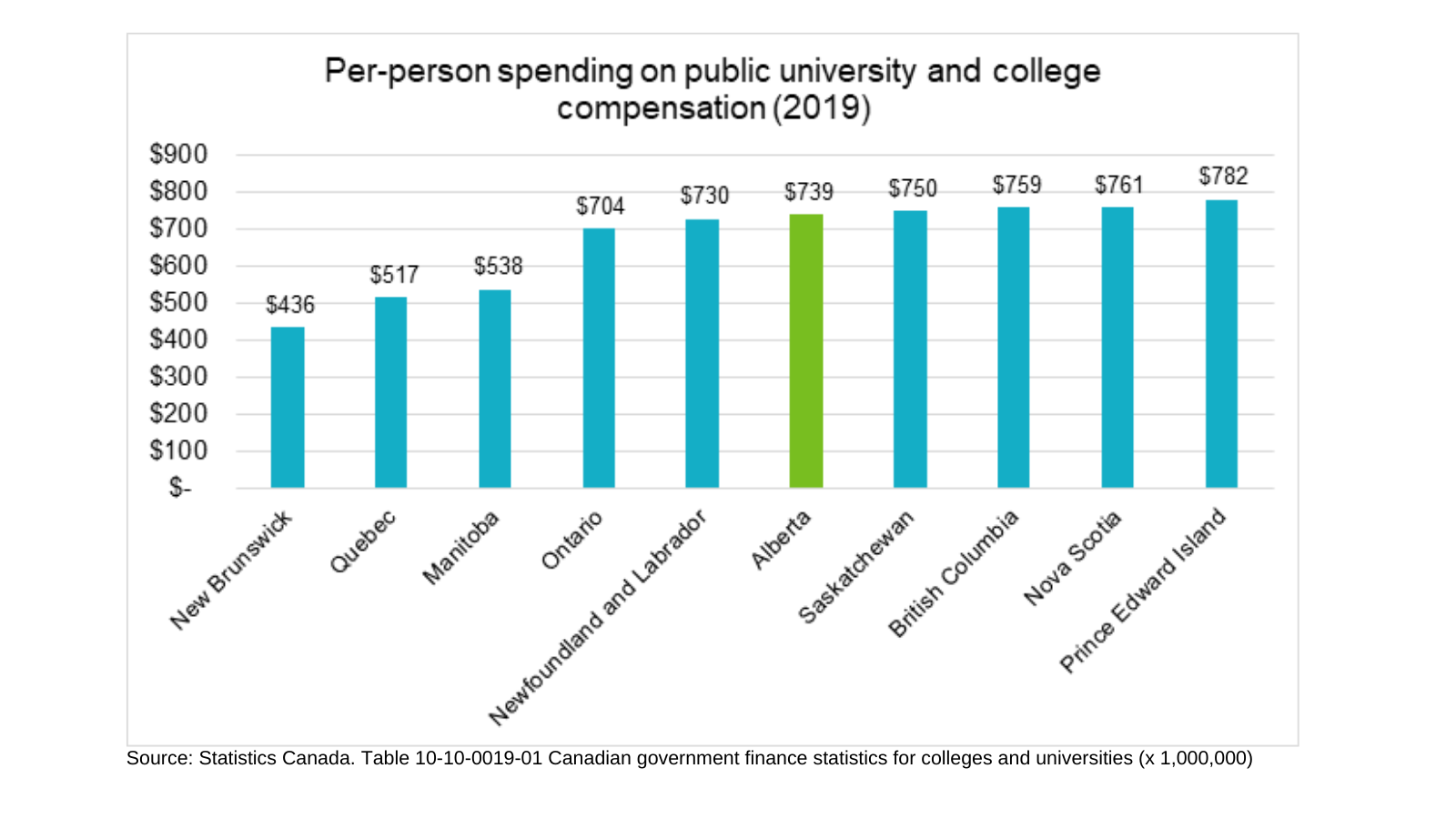 The cost to the average Albertan for public university and college wages and salaries is, again, not out of line with the rest of Canada. We pay less than Saskatchewan and British Columbia.

So, what’s this all about?

His privatization agenda has many facets. It includes lower wages for low-income young workers.

And his privatization agenda includes driving down wages of government workers.

Jason Kenney must be stopped. Join us to Stand up to Kenney.