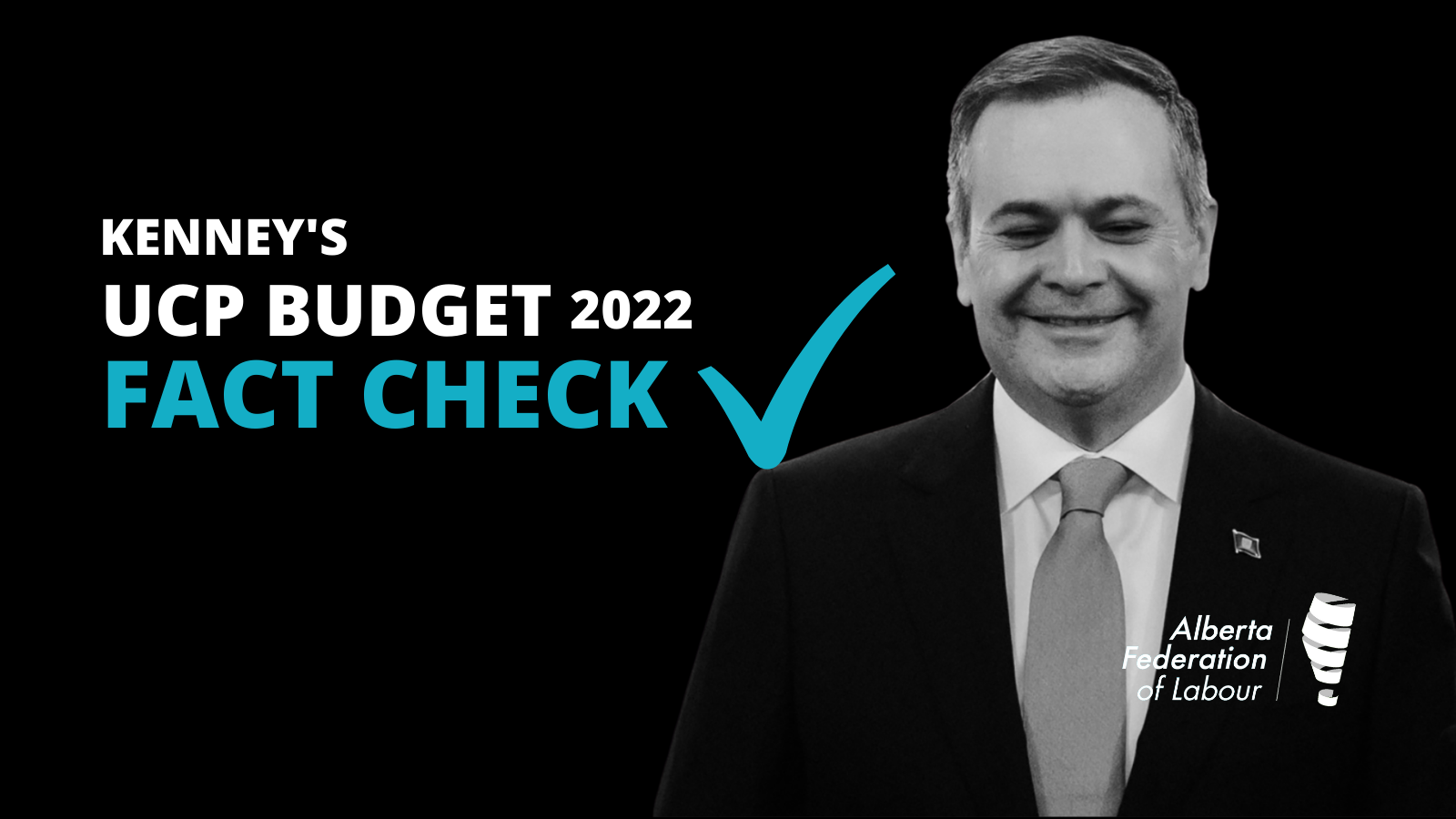 Despite the grand celebration Kenney’s UCP government put forth, which was perhaps best described by CUPE Alberta as a “master class of deception and gaslighting,” there is little good news in the budget for working Albertans and a lot of unknowns as to where funding is actually going especially given the UCP’s plans for privatization of health care and education.

Albertans have shouldered three years of increasing taxes, higher costs, underfunding of public services and outright cuts. The budget shows workers will continue to do the heavy lifting of the so-called recovery.

After three years of cuts and underfunding, the UCP government posted a small surplus ($511 million) with revenues boosted by high oil and gas prices mostly due, in part, to Russia’s war with Ukraine. Since the Kenney UCP government has proven they are anything but trustworthy, the AFL has gone through the budget to determine the facts.

In the budget, the UCP brag that, “Regular operating expense has increased by only 3.6 per cent since 2018-19.” The general rule of thumb for public services is that spending should keep pace with inflation and population growth, otherwise it is a cut. Since the 2018-19 budget (the last one from an NDP government), inflation and population growth totals around 9.4 per cent to this year. This means the UCP government underfunded (and in many cases cut) public services by about 5.8 per cent, or approximately $3.1 billion since 2018-19.

There is no relief from rising college and university tuition, rising food costs, rising insurance costs, rising electricity and natural gas costs. Overall, tuition revenue will increase by $149 million through fee increases, which is a deliberate decision by the UCP. The UCP also removed the price cap on electricity that the previous government put in. Many Albertans have felt the sting of record-high electricity bills. Similarly, the UCP removed the NDP’s cap on auto insurance costs and the rates Albertans pay has predictably jumped. Food costs have increased big time, but no relief in the budget. On natural gas costs, Premier Kenney dusted off a Ralph Klein-era program to provide a rebate to consumers if natural gas prices hit $6.50/Gj, but that program won’t start until October 2022, and the threshold price is so high that it is unlikely Alberta households will see any relief at all.

Personal income tax revenue and corporate income tax revenue is projected to grow over the next fiscal year as the economy emerges from a recession that started in 2019, after Kenney was elected and before the global pandemic. It’s important to note that budgets like this are forward-looking forecasts, so they are not a sure thing. Things could change over the next year.

Personal income tax rates used to be tied to inflation, so that they would stay relatively the same every year, but Premier Kenney and the UCP did away with that. The result is personal income tax rates have increased every year. Meanwhile, large profitable corporations got a big tax cut during the recession. Kenney and the UCP promised to cut taxes for corporations, but they also promise that this tax cut would create 55,000 new jobs and would be “self-financing” due to trickle-down effects of wealthy shareholders having even more wealth. There is no evidence that this has happened.

What is Alberta at Work?

As if to confirm that the corporate tax cut did not create jobs, the UCP government announced a new program called “Alberta at Work,” which will cost $600 million over three years. The UCP’s scheme is to expand charter schools and colleges to align education with the expectations of employers in terms of workers’ skills. This will not help unemployed or under-employed workers now, when they need it. Given the underfunding and cuts to education over the past three years, a program like this will create chaos in the public education system. This is certainly something the AFL will keep an eye on in the coming years.

In terms of health care, the UCP are, once again, opting to privatize the public system, they seem relentless in their push for American-style for-profit health care. Previously, Premier Kenney announced that he wanted more surgeries outside of “union-run hospitals” by shifting them to private, for-profit surgical facilities (paid for with public dollars). In the budget, the UCP announced $133 million over three years for capital funding to boost the number of surgeries done in the for-profit settings. Details are unclear in the budget, but it appears that public dollars will subsidize the actual brick-and-mortar facilities, meaning a subsidy from the public to the private. The budget also had a smattering of other funding for health care, such as $100 million per year for additional capacity (i.e., ICU beds) and $64 million more for emergency medical services (ambulances). Funding for physicians is unchanged from last year, but there is a targeted $6 million program to get doctors to rural Alberta. Overall operating funding for health care increased by only 2.4 per cent, far less than inflation and population growth (a cut in real terms), as well as the effects of an aging society on the health care system.

For K-12 education, the now-familiar story of underfunding continues. Over the past three years, provincial funding has not kept pace with population growth and inflation (that’s a cut). For this budget year, the UCP will increase funding at 1.7 per cent, far less than inflation and population growth. Within that funding envelope, there’s targeted funding of $30 million to help children with academic challenges, as well as $13 million for ventilation system improvement, which is likely far less than what’s needed for safe classrooms (Edmonton Public Schools spent $6 million on ventilation, for comparison). There is the aforementioned boost to charter schools to align education with employer demands ($600 million over three years), and the government promises to force the much-criticized new UCP ideological curriculum onto Alberta schools.

The budget notes some profound challenges in the labour market for Alberta workers and we largely agree: “Persistent labour supply issues, including access to affordable child care and an aging population, will increasingly affect the labour market as Alberta’s economic recovery gains momentum.” Affordable child care remains a barrier for many families to realize full employment. The federal government stepped forward to fund child care ($666 million in this year’s budget), but it will take time for Alberta families to see this support. In terms of an aging society, there are huge challenges to caring for older Albertans, as well as replacing workers in the labour force after they retire.

The budget also notes, “the proliferation of remote work options, increased automation and digitization, and the demand for new specialized skills will change the nature of work and create both opportunities and challenges for our province.”

There’s little relief for working Albertans in the UCP’s 2022 budget. Workers will continue to shoulder the effects of underfunding of public services, higher taxes, and higher food/energy/tuition costs. The UCP’s projected surplus is small and based on oil prices over the next year, so it is subject to change. Alberta is still far too dependent on oil and gas royalties for revenue, making the budget unstable. Couple the budget instability with ongoing cuts, chronic underfunding, along with labour market challenges and the outlook for Alberta workers is at best, uncertain.