Jason Kenney has been trying to reassure working Albertans that his party’s plan to change the system for calculating overtime pay is no big deal. But that job just got harder with the passage of Bill 66 in Ontario by the government of conservative Premier Doug Ford.

Among other anti-worker changes, Bill 66 will make it easier for employers to use so-called overtime agreements as a mechanism to get around the requirement to pay workers time-and-a-half for overtime hours. This is similar to the approach being proposed here in Alberta by Kenney and the UCP.

“This should be seen as a cautionary tale from Ontario,” says Alberta Federation of Labour president Gil McGowan. “Whether it’s Ford’s Ontario or Kenney’s Alberta, these changes will take money out of the pockets of working people. Despite all their rhetoric about being ‘For the People,’ it’s clear that both Ford and Kenney are working for their friends in business, not ordinary workers.”

Several months ago, Kenney said this about Ford: “I’ll tell you, we’ve got the beginning of a bit of bromance there… We were finishing each other’s sentences. I love it.”

McGowan says it’s now clear that “finishing each other’s sentences” means that Kenney and Ford are working from the same playbook: “And it’s a playbook that’s designed to suppress wages and workers’ rights.”

McGowan says the people who should be most worried about the changes proposed by Kenney are those who work in the industries that work the most overtime hours – oil & gas and construction – especially if they don’t have a union and a collective agreement to protect them.

“Make no mistake, the UCP platform announcement about overtime is all about delivering changes that are being asked for behind closed doors by employers in oil & gas and construction. They want to reduce their costs by reducing wages for oil & gas workers and construction workers. Jason Kenney seems more than willing to use the power of legislation to help them achieve that goal – even if that means working against the interests of ordinary working people.”

Ironically, these news rules will provide incentives for employers to work existing employees for much longer hours, rather than hiring more workers to get the work done – a fact that is completely at odds with Kenney’s stated goal of creating more jobs for Albertans. 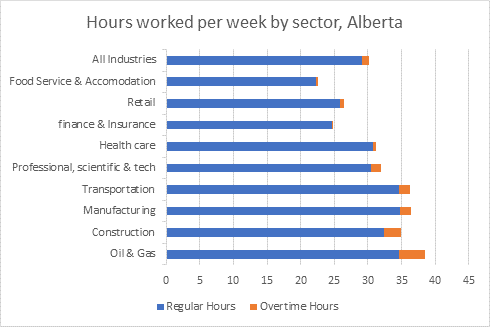