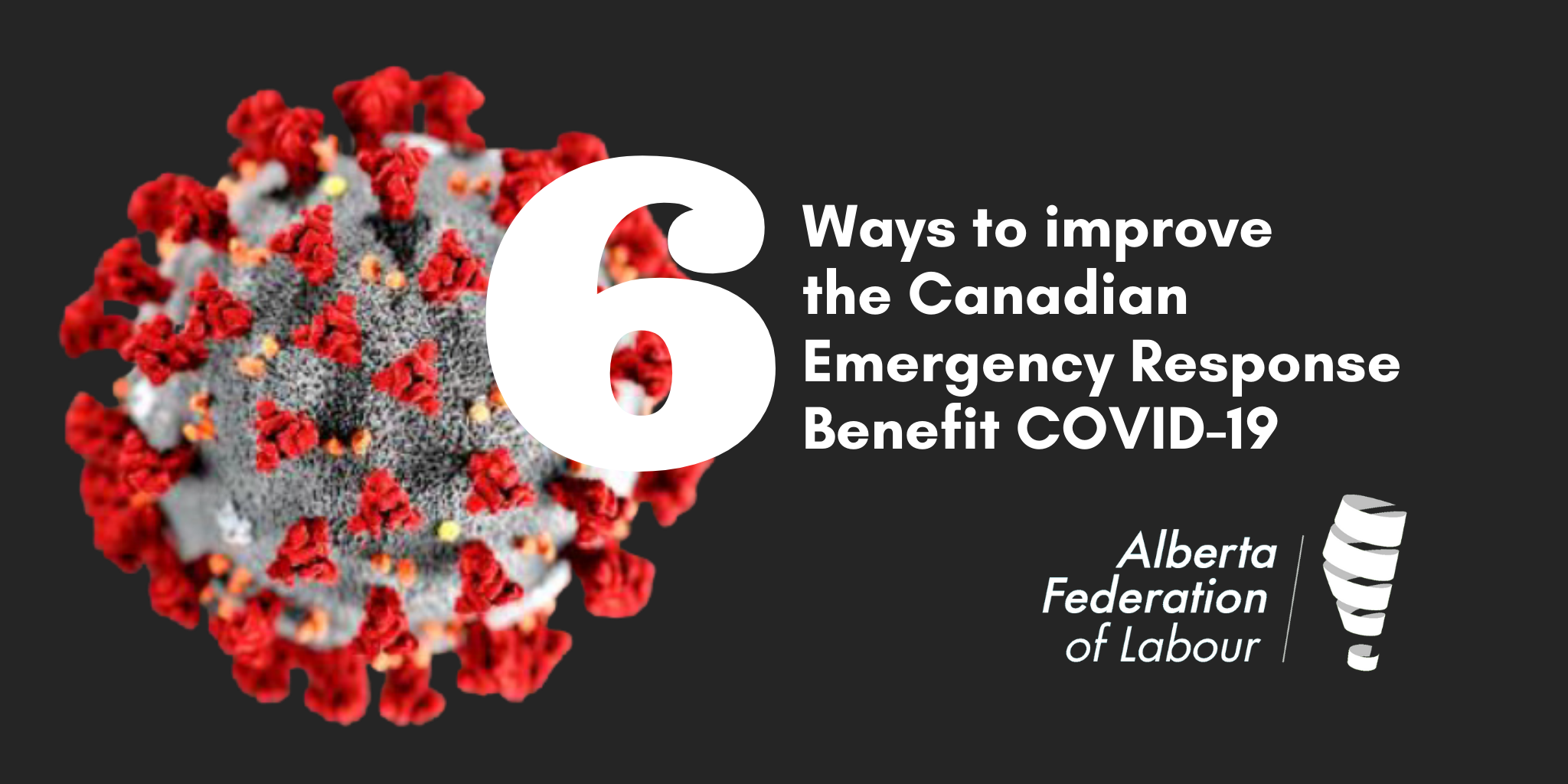 While the efforts the federal government has made to help Canadians through the COVID-19 pandemic are laudable, any government response to the unprecedented pandemic needs to be an iterative process. Adjustments will need to be continuously made to address unforeseen issues or gaps in the response programs.

The Alberta Federation of Labour has outlined six gaps and inadequacies, and suggestions to quickly address them, specifically focusing on the CERB.

Workers and unions who have negotiated wage top-ups during this crisis are currently being unnecessarily penalized by being excluded from the CERB. We must recognize that the current monthly support rate of $2000 is inadequate for most Canadians to survive during this crisis, especially in cities with a high cost of living. An employer-paid top-up helps many Canadians and their families survive and thrive during these hard times. In addition, many employers have medical and dental benefits packages that are contingent on maintaining an employment relationship, which should be widely encouraged as Canadians currently do not have access to a federal Pharmacare plan. Allowing employer-paid top-ups for workers helps ensure that employers are not unnecessarily laying off workers due to an incorrect assumption that all employment relationship ties must be severed in order for workers to qualify for the CERB. It should also be noted that under the regular Employment Insurance (EI) benefits, workers receiving a top-up would not be penalized – rather, these employers would enjoy slight EI premium relief in some cases to actively encourage such supplementary unemployment benefit plans. It is unacceptable to exclude any group of workers that would receive benefits under the regular EI benefits from the CERB income support.

Another group of workers who are being excluded from the CERB benefit are seasonal workers. This group of workers, who would normally be re-entering or joining the workforce for the first time, are being affected by the COVID-19 crisis in an equivalent manner to workers who were already in the labour force. These workers include those who are active in seasonal industries such as fisheries, construction and tourism. These workers also include students who may be finishing up a year in post-secondary and who would normally return to a summer job. All workers who are unable to find employment or return to their employment because of COVID-19 should be eligible for the CERB. We should not be excluding any workers because of the timing of the crisis.

We are also concerned for workers who are currently accessing the EI program. This may include workers who are coming to the end of their regular benefits and who can no longer find employment because of COVID-19. Allowances should be made to ensure these workers do not fall between the cracks and are able to access federal support such as the CERB by automatically rolling their EI applications into the CERB program if they are still unemployed when their EI benefits run out.

4. Excluding Workers Whose Income Has Dropped

Another group of workers who seem to be falling between the cracks of our various income support programs are those who are still employed but are experiencing a reduction in hours and pay because of COVID-19. Many Canadian workers no longer have access to stable full-time employment and have ended up piecing together multiple jobs in order to make ends meet. Some of these workers still have access to part-time or gig income at a dramatically reduced rate that cannot reasonably support their lives. In other cases, workers who would normally be working full-time have seen their pay reduced as a result of having their hours reduced. It is vital for any income support program to encourage workers to maintain their employment relationships and income during this crisis. We should not have workers asking to be laid off in order to qualify for government benefits.

Considering many of these workers would be eligible for regular EI benefits under the Working While on Claim program (which they can no longer apply for), allowances should be made under the CERB. Given that the federal government will be processing an unprecedented number of these cases, we advise it would be best to make all workers who have lost or seen a drop in income because of COVID-19 eligible for the CERB. When workers file their taxes a certain percentage of the CERB payment could be paid back during an interest-free period of 1 year at the same rate as the Working While on Claim program. This would ensure that all working Canadians receive the income support they need right now, and allow those who can to continue to earn income and maintain their employment relationships.

5. Excluding Workers with Just Cause for Quitting

A final group of workers who should be eligible for the CERB are workers who have just cause for quitting their current employment. Normally, these workers would also be covered under the EI program but due to eligibility differences in the CERB they will no longer be covered. These are unprecedented times and although many employers and workers are adapting well to the situation, there are still instances where workers are put in positions where their only reasonable course of action is to quit their jobs. The addition of COVID-19 may actually exacerbate some of these situations, especially for workers who have underlying medical conditions or are older in age, are living with people who have underlying medical conditions or are older in age, or workers whose employers are not properly mitigating their risk and exposure to COVID-19. In all of these situations, we may have workers who reasonably feel they must quit their current employment for their own safety and that of their family. These workers should not be penalized under the CERB system but rather given the benefit of the doubt. To repeat, no workers who would have been covered under regular EI benefits or sickness benefits should be excluded from the CERB eligibility.

6. Inadequate Support for the Cost of Living

One last issue is that the current CERB income support amount is not adequate for many Canadians to sustain themselves during this crisis. Albertans have a high cost of living in terms of their rent, utilities, food, and other basic expenses. The amount of the benefit should be increased to what is recognized more broadly as a living wage.

It is imperative that these changes be made swiftly to ensure more people do not fall between the cracks and that Canadian workers are properly supported through this crisis. As stated in the federal government’s own press release: “Given this situation, all Canadians who have ceased working due to COVID-19, whether they are EI-eligible or not, would be able to receive the CERB to ensure they have timely access to the income support they need.”

All workers affected by COVID-19 measures need to be supported and it is vital that the government get money to these Canadians as quickly as possible.