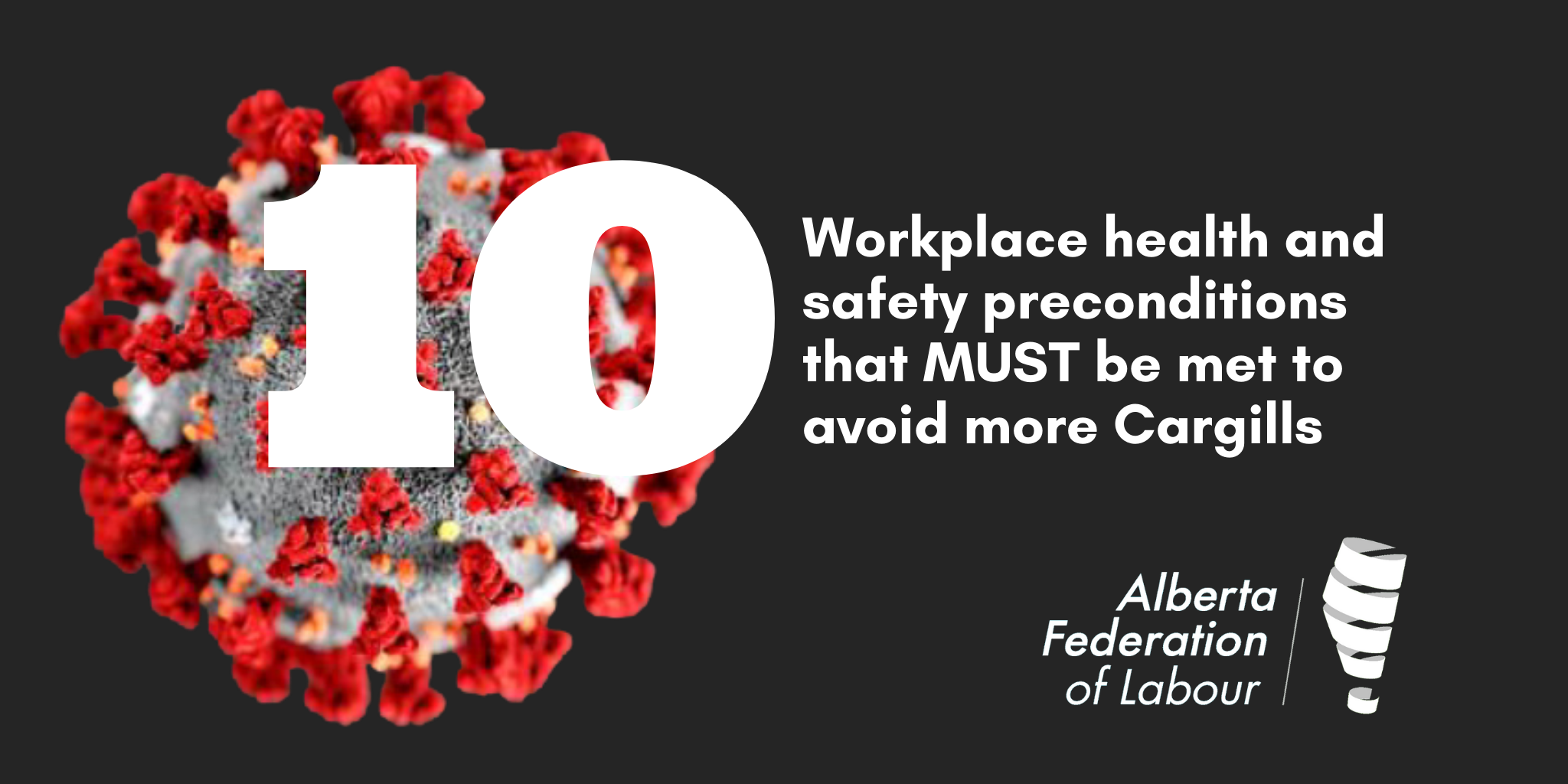 So, Kenney wants to reopen the economy? Not so fast!

After nearly two months of lockdown aimed at stopping the spread of COVID-19, Premier Jason Kenney has started to talk about reopening the Alberta economy. The leaders of unions affiliated with the Alberta Federation of Labour (AFL) understand the desire of the Premier and our fellow Albertans to return our province to something resembling normal. We are also eager to see our members return to work. However, we feel strongly that pandemic restrictions should not be lifted and employers should not be given the green light to resume operations until the safety of all returning workers can be guaranteed. Unfortunately, we do not feel the necessary safeguards are currently in place to provide such assurances.

We are particularly concerned that the provincial government has, so far, failed to look at the COVID-19 pandemic through the lens of workplace health and safety. This helps explain why the Cargill meat-packing plant in High River and the JBS meat-packing plant in Brooks, by themselves, are responsible for more positive cases than the tallies of Saskatchewan, Manitoba, New Brunswick, Newfoundland, and PEI combined. Outbreaks are now also being reported at Purolator and Amazon warehouses in Calgary and the Harmony Beef facility in Balzac. Unions affiliated with the AFL are also reporting positive tests at a wide variety of other workplaces, including long-term and continuing care facilities, warehouses, grocery stores, construction work camps and other food processing facilities.

When these outbreaks are added to the associated community spread, more than 40 per cent of all COVID-19 cases in Alberta are the result of workplace exposure to the virus.

From our perspective, the Alberta government’s handling of the COVID-19 crisis in Alberta workplaces has been a failure – one that jeopardizes the success of public health efforts in the broader community. Here is a list of things we need to see happen before we can lend our support to plans to reopen the economy. If these common-sense steps are not taken, we fear that more lives will be lost and Albertans will have to endure new waves of infection and lockdown. Only by taking these steps can Albertans have the confidence necessary to go back to work and begin the process of rebuilding and reanimating our economy.

Workers at the Cargill meat-packing plant started raising red flags about possible infection in their workplace in March. Together with their union, they begged the employer and the government to suspend operations at their plant two and a half weeks before the first worker died. If authorities had listened to the workers, the outbreak could have been contained and lives could have been saved. Front-line workers can serve as an early warning system. Other workplaces around the province should not be reopened until a transparent and responsive system for handling worker concerns and complaints has been created.

Unions are experts in workplace health and safety. They are also in touch with front line workers in ways that employers and government regulators are not. In the case of Cargill, the union made dozens of constructive suggestions about how the workplace could have been made safer. Unfortunately, both the employer and the government ignored their input for weeks – and a crucial opportunity to save lives was missed. The Alberta economy should not be reopened until the government commits to listening to union concerns about workplace safety – and incorporating union input and suggestions into government strategies for promoting worker and public safety.

The precautionary principle is one of the foundations of modern and effective workplace health and safety practice. It stipulates that, when lives are at risk, we should err on the side of caution by taking action to eliminate potential hazards or shutting down potentially dangerous worksites – even if that action may seem premature to some; even if there are competing interests (like industry profits); and even if not all the facts are in yet. The precautionary principle is why provinces like B.C. and Quebec issued orders suspending operations at meat-packing plants after only a handful of positive cases had been identified. Here in Alberta, the precautionary principle is not being used in our response to the COVID-19 pandemic – and, as a result, lives have been lost and opportunities to stop the spread of the virus have been missed. Alberta workplaces should not be reopened until the Alberta government commits to putting the precautionary principle at the heart of its strategy for managing the COVID-19 pandemic.

So far, the occupational health and safety branch of the Alberta government’s Labour Department have conducted no proactive inspections of Alberta worksites to ensure compliance with COVID-19-related directives issued by public health officials. When inspections have occurred, they have been after the fact. Even in the case of the massive Cargill outbreak, a workplace health and safety inspection was only conducted after hundreds of workers had already contracted the virus – and even then, the inspection was conducted “virtually” via FaceTime. To say this is inadequate and unacceptable would be an understatement. The Labour Department has the legal authority to conduct proactive inspections. What’s stopping them at the moment is political will. The Alberta labour movement will not support reopening the economy until the provincial government commits to an aggressive strategy of proactive workplace health and safety inspections to ensure employers are complying with COVID-19-related public health directives.

5. Move from “guidance” to orders

The Premier and the Chief Medical Officer of Health have repeatedly said that they are relying on the public voluntarily following the guidelines set out by public health officials. It’s debatable how well this has worked in the public sphere, but it’s clearly problematic when it comes to workplaces. That’s because employers have many interests (profits, production targets, etc.) that compete with public health interests. In order to ensure compliance by employers, it’s naïve (and even irresponsible) to rely exclusively on goodwill. With that in mind, we feel very strongly that the Alberta economy should not be reopened until the government agrees to replace public health “guidance” for employers with enforceable orders.

In a similar vein, the government has decided to leave oversight on the implementation of COVID-19-related workplace health and safety measures in the hands of employers. The job of the government has been reduced to providing guidance and responding to employer questions and requests for assistance when asked. This amounts to a decision by the government to allow employers to regulate themselves when it comes to compliance with public health directives. As worker representatives, we simply cannot support reopening the economy until the government abandons its naïve, insufficient and irresponsible decision to allow employers to essentially regulate themselves when it comes to compliance with COVID-19-related public health directives.

Since the beginning of the global pandemic and the provincial COVID-19 lockdown, the Alberta government has not fined or closed down a single employer in Alberta – even though many have clearly been flouting public health directives and some have arguably been criminally negligent. Even in the outrageous case of Cargill, it wasn’t the government that suspended operations at the plant – that was a decision made by the company (only after a worker had died). It’s very difficult for us to understand why so-called “law and order” conservatives like the UCP are so quick to call for consequences for individuals (including workers) when they break the rules but seem so reluctant to impose consequences on employers. What’s the point of having rules if they’re not enforced? How seriously do you think employers will take rules if they never face any penalties or consequences for breaking them? With that in mind, we say that Alberta workplaces should not be reopened until the government shows that they are willing to impose consequences on employers who put their workers at risk by violating COVID-19-related public health directives – starting by taking legal actions, including criminal prosecution under the Westray Act, against employers like Cargill and JBS.

A global consensus among public health officials has emerged that one of the best ways to stop the spread of COVID-19 is to aggressively test people so we can identify carriers and separate them from others while the virus runs its course. Given that workplaces have been one of the main generators of outbreaks in Alberta, we believe that workplace testing needs to become a central part of Alberta’s approach to containing the virus. Unfortunately, there has not been a coordinated plan for testing workers in affected workplaces. Unions affiliated to the AFL have reported numerous cases of workers being sent home without testing, even if they’ve been exposed to COVID-positive co-workers and even if they’re exhibiting symptoms themselves. We cannot support reopening the economy until the government and public health officials develop and implement a more robust system for workplace testing.

9. Don’t blame the victim, help them

The Alberta labour movement has generally been very supportive of the leadership being provided by our province’s Chief Medical Officer of Health, Dr. Deena Hinshaw, during the COVID-19 crisis. However, we were very disappointed when she suggested in a press briefing that the outbreak at Cargill might have been caused by employees carpooling to work or living in cramped quarters, as opposed to having contracted the virus while working elbow-to-elbow on the production line or bumping together in the company’s crowded cafeteria or locker rooms. These comments ignored the reason why these workers carpooled and often lived in substandard accommodation: they’re poorly paid. Instead of giving excuses to employers and blaming the victims, we should be addressing the issues faced by low-paid and vulnerable workers. For example, companies could be required to provide buses for employees where physical distancing can be practiced more easily. The government and employers could also provide accommodation for COVID-19-positive workers who are not able to physically isolate at home (this has been done with great success in a number of Asia countries, most notably South Korea). Failure to help and support vulnerable workers is what led to a massive second wave of infection in Singapore (which had previously been hailed as a leader in containing the spread of COVID-19). It has also been at the heart of the outbreaks at places like Cargill and JBS here in Alberta. With that in mind, the Alberta labour movement will not support plans to reopen the economy unless they include robust and properly-funded strategies to address issues of low-paid, vulnerable workers that make them more likely to be exposed to and infected by the coronavirus disease.