‘We all need to push back because Canada’s middle class is at risk,’ says McGowan 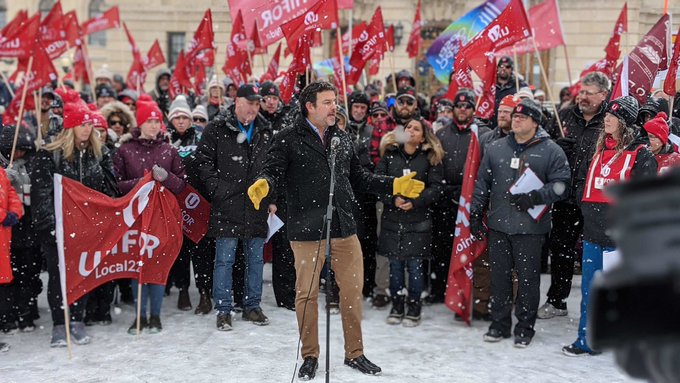 Regina - The Alberta Federation of Labour president, Gil McGowan, flew to Regina today to support Unifor 594 workers in their fight against Co-op Refinery. Watch the Facebook Live video of the rally at the Saskatchewan legislature today.

“Solidarity is more important than ever, we must join together to fight against conservative governments and anti-union employers,” says McGowan.” They want to create a take or leave it labour market and weaken worker rights and wages.”

“We all need to push back because Canada’s middle class is at risk,” says McGowan

Co-op Refinery locked out its workers on December 5. 2019 because workers said no to being forced to choose between one gutted pension and one that’s half the value of the current plan. The company wants to gut the pension plan and eliminate the jointly funded Savings Plan. Workers were promised their pensions two years ago and now Co-op wants them to take a wage cut of 11% in order to fund the plan. In addition, the company wants to eliminate the savings plan, amounting to another wage cut of 6.5%. Learn more: https://www.boycottco-op.ca/