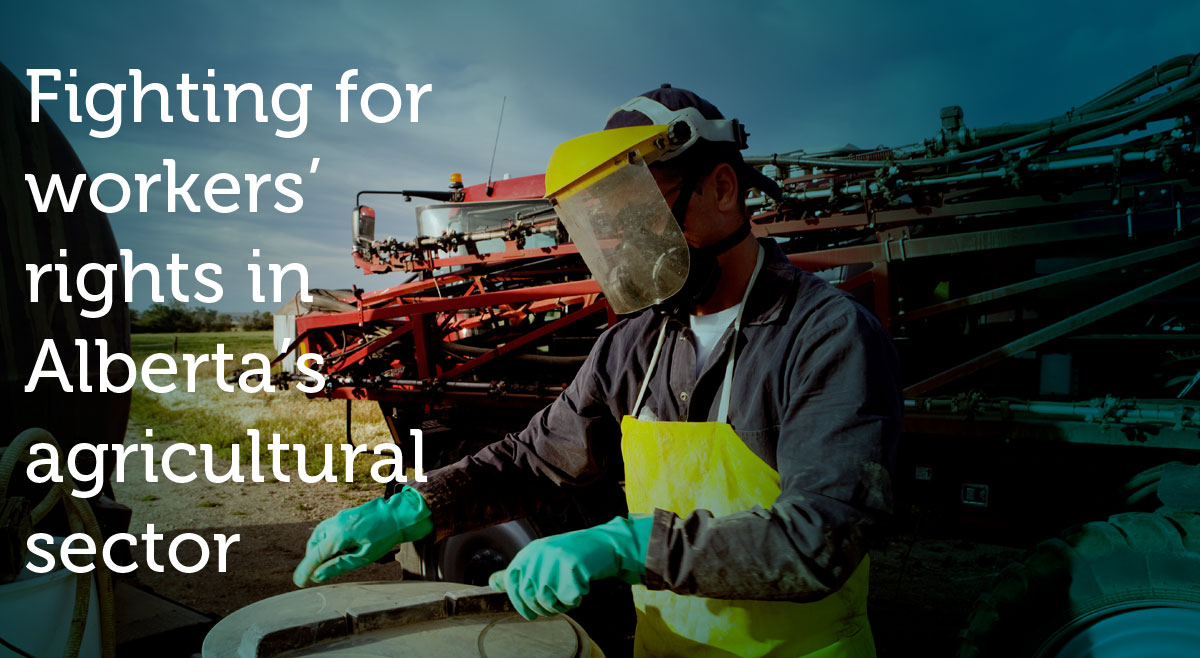 Government given one year to fix labour legislation that violates constitution

Edmonton –Alberta laws that interfere with the right of public-sector workers to go on strike violate the Canadian Charter of Rights and Freedoms, the Court of Queen’s Bench has ruled.

In a sweeping judgment handed down on Tuesday, and accepted by the Government of Alberta today, Justice Dennis Thomas ruled the blanket prohibitions against strikes and lockouts in Section 96(1)(b) and 96(1)(c) of the Labour Relations Code, and sections of the Public Service Employees Relations Act (PSERA) violate the Canadian Charter of Rights and Freedoms and are not saved by the Charter’s provision allowing reasonable limits as can be demonstrably justified in a free and democratic society.

“Albertans have a right to work together, to look after each other and to stand up for themselves when needed,” Alberta Federation of Labour president Gil McGowan said. “Attacking those rights doesn’t lead to labour peace – it leads to long-term problems. I am very pleased that Justice Thomas in his wisdom has reaffirmed those rights.”

This is the latest in a series of court decisions in Canada that have reaffirmed the fact that the right to free association includes the right to bargain collectively, and to engage in collective work action. In his decision, Justice Thomas cited the Supreme Court of Canada’s Jan. 30 decision in Saskatchewan Federation of Labour v. Saskatchewan, which saw the country’s top court strike down a Saskatchewan law that prevented public-sector employees from striking.”

Unions working together to make Alberta a better place

The Alberta Federation of Labour is a voluntary association of unions and employee organizations that have banded together to achieve common goals.

Since 1912, when unionized miners and tradespeople from southern Alberta first agreed to work together under the umbrella of a labour central, the Federation has fought hard to improve conditions for working people, their families and their communities.

Among the Federation’s earliest priorities were ending child labour and establishing occupational health and safety regulations — especially in Alberta’s coal fields which, at the time, had the highest workplace mortality rates in the world.

In its early years, the AFL was also active in the struggle for a minimum wage and the reduction of work time to a standard 40-hour week.

Today, the Federation continues its tradition of speaking out on the issues that matter most to working people. Often these issues relate directly to the workplace. But the AFL is also active on a wide range of broader social issues — like the need for public education and public health care.

The AFL is currently made up of more than 25 unions from both the public and private sectors. Taken together, these unions represent nearly 175,000 workers from across the province.

The AFL’s priorities are set at membership conventions held every two years. Every union affiliated to the Federation is entitled to send delegates to conventions in numbers proportionate to their membership.

Between conventions, the AFL is run by its two elected officers — the president and the secretary-treasurer — along with the Executive Council.

The Executive Council, which meets between five and eight times a year, is made up of representatives from each affiliated union. Unions with between 1,000 and 2,500 members are entitled to one seat at the council table and unions with more than 2,500 members have two seats.

Despite differences in history and culture, the unions affiliated to the AFL have always been able to identify common priorities and goals — and they have accomplished more as a team than they would have if they had acted separately.

Making A Difference in Alberta

The importance of unions working together through the AFL has been demonstrated numerous times over the past few years.

In a province like Alberta where the business community is particularly hostile to unions, it’s not always easy for groups like the AFL to get things done. But the challenges faced by unions in Alberta underline the importance of unity. It’s the oldest lesson of the labour movement: Working people are stronger when they work together.

Alberta remains one of the most dangerous places in Canada to work, especially for young workers: AFL

Edmonton – The Alberta Federation of Labour is responding to Saturday’s death of a 15-year-old worker.

Alberta’s child, youth, and adolescent labour laws are among the worst in Canada, says the AFL. The province had a chance to toughen up those standards in a recent Employment Standards review, but nothing came of it.

“Alberta’s child labour laws are among the most lax in Canada,” says Siobhan Vipond, AFL Secretary Treasurer. “The AFL has repeatedly made recommendations to improve working conditions and safety standards, specifically for young workers. This weekend’s tragic news is yet another reminder that much more needs to be done to keep Albertans safe at work.”

“Just a few months ago, Employment Minister Thomas Lukaszuk launched a review of Alberta’s workplace laws. But the first item up for review was a question about expanding child labour,” says Vipond. “Instead of rushing more young workers onto potentially unsafe work sites, we need to keep young workers safe. Today, Alberta is one of the most unsafe places for young people to work.”

The AFL’s submission on April 11, 2014 to the Employment Standards contained several pages of recommendations on young workers.

"Alberta needs targeted inspections of workplaces that employ 15-17 year olds, especially in construction and other comparatively dangerous occupations,” says Vipond. “The AFL made urgent recommendations earlier this year, and this past weekend we are sadly reminded why these changes are so desperately needed in Alberta.”

A recent survey showed 49.7% of 797 adolescents surveyed had experienced at least one workplace injury in the previous year.

For 15-17 year olds, the research has shown young, minor workers are particularly vulnerable to abuses in the workplace, such as illegal deductions, unsafe work, handling of hazardous materials, and sexual harassment.

For that reason, the AFL recommended a program of targeted inspections and a special, mandated health and safety training programme for employers who hire 15-17 year old Albertans. Alberta must also review whether some industrial activities or occupations are prohibited for adolescents, particularly in forklift operations and construction work.

Edmonton – Good Canadian jobs continue to vanish into thin air as if by magic due to the Temporary Foreign Worker Program.

Alberta’s largest labour organization released evidence today showing TFW welders can be paid less than half the going rate. This is a clear example of employers abusing the system, despite the Harper government’s claims of cracking down on the TFW program.

A Kijiji ad, posted by a recruiter on June 27, 2014, suggests approvals were granted to employers to fill jobs as Welders and Related Machine Operators (NOC 7265) in Alberta and Saskatchewan at wages of $13 to $20 per hour. At the low end, this is less than half the going rate for Canadian welders.

“It’s starting to look like Jason Kenney’s cleanup of the TFW program was smoke and mirrors,” Alberta Federation of Labour President Gil McGowan said. “While he was promising a crackdown, his department issued Labour Market Opinions for TFWs to work as welders and be paid less than half the wage being paid to Canadians.”

The Kijiji posting invites applicants to submit resumes and Skype IDs to Miles Andry of Canadian Shield Immigration. Mr. Andry does not appear to have any construction-related Human Resources experience. His LinkedIn profile lists him as a Canadian Shield recruitment specialist for the past two years and a professional magician for the past 12 years.

“These are some of the best jobs in the Alberta economy, and the Harper government has literally handed them over to a magician to make good wages disappear,” McGowan said. “All of this talk of cleaning up the program, cracking down on abuses, and making sure Canadians get first crack at jobs appears to be nothing more than sleight of hand.”

“Instead of a circus sideshow designed to trick the public, Mr. Kenney needs to get serious about cleaning up the mess he made,” McGowan said. “Mr. Kenney should wave his magic wand and cancel every LMO his department issued unlawfully, below the wages paid to Canadians for the same job”

Ad is posted at: http://www.kijiji.ca/v-construction-trades-jobs/calgary/welders-needed-lmo-available/1000543369?siteLocale=en_CA

Wage Profile from Government of Alberta WageInfo, for Welders and Related Machine Operators

EDMONTON – Problems with the Temporary Foreign Worker program are not limited to the food service industry.

At a press conference at 11 a.m. on Friday, April 25, the Alberta Federation of Labour will unveil research showing that hundreds of Labour Market Opinions – which are required for employers to bring in Temporary Foreign Workers – have been issued in direct contravention of the rules of the program.

"There is a clear pattern to this government's handling of the Temporary Foreign Worker program," Alberta Federation of Labour president Gil McGowan said. "They're bending, breaking, circumventing and ignoring the rules they set up to prevent abuse. And because of that, employers in all kinds of sectors are using the program to drive down wages across the country and throughout the economy."

What:  New research shows problems with TFW program pervasive across many sectors of the economy