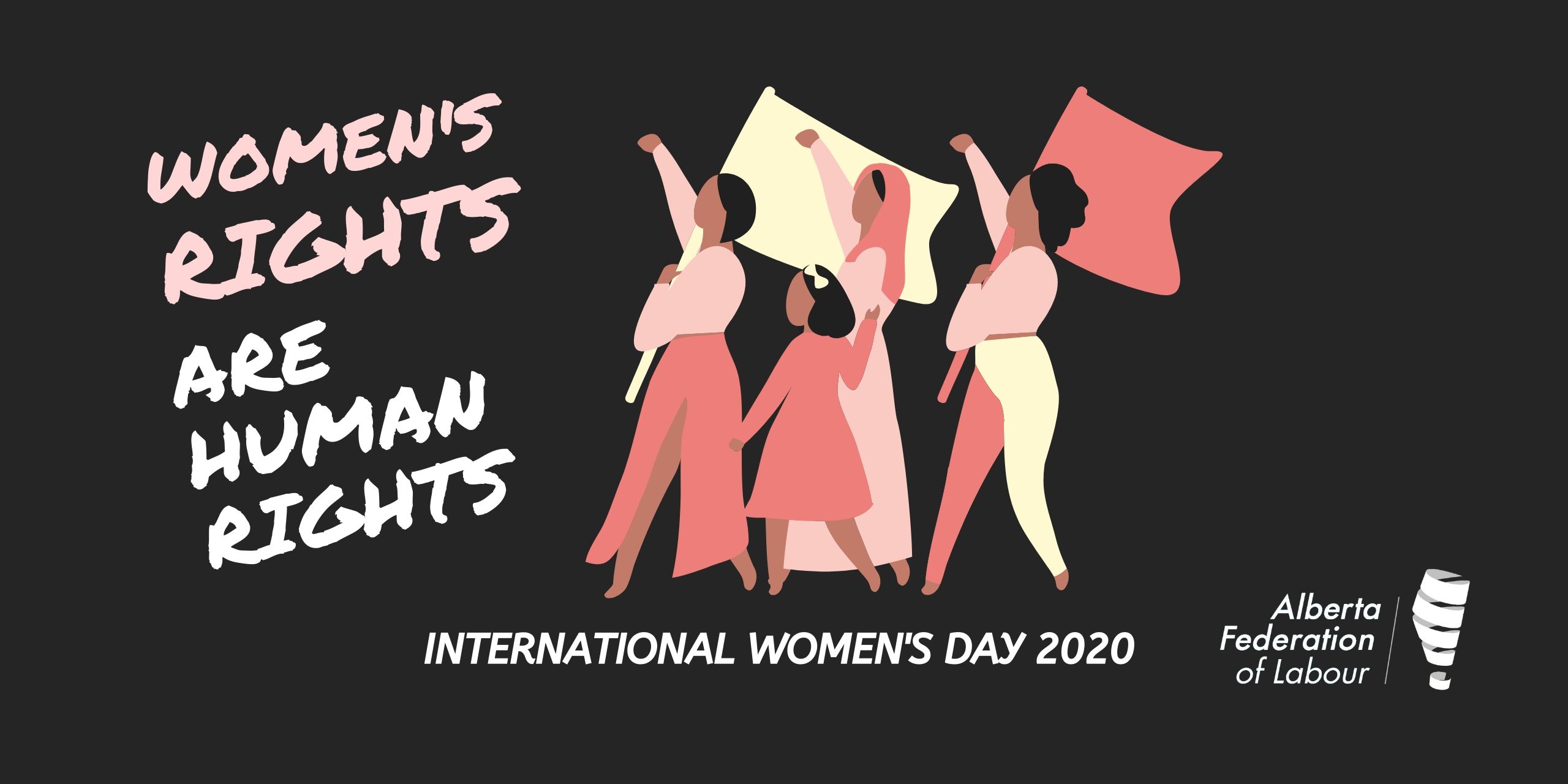 The UCP Attacks on Women in Alberta

So far, the UCP cuts and attacks have disproportionately targeted female-dominated sectors in Alberta, such as health care and child care. They have also started cutting other women-dominated workforces including the provincial public service and the education sector. Other important sectors, such as the arts sector, which employs a number of women in Alberta, have also been cut by the UCP. The UCP is currently reviewing minimum wage in Alberta, with a stacked review panel, with the prospect of bringing in a lower minimum wage for servers in the hospitality sector, which is also a female-dominated workforce.

All of these attacks and cuts undermine the ability for women in Alberta to work, and adds to the fact that Alberta still has one of the highest gender pay gaps. This pay gap persists despite Alberta having one of the highest employment participation rates in Canada for women. Alberta also does not have adequate pay equity legislation to counteract these attacks and may actually be violating the Canadian Charter of Rights and Freedoms by lacking such legalization.

Women’s health care has not been spared from the UCP cuts in Alberta. The recent Ernst and Young review of Alberta Health Services recommends making a number of cuts that would disproportionately impact health care for women. For example, the report recommends delisting specific procedures claiming they have “limited clinical value” that disproportionately impact women, such as breast reduction, carpal tunnel release, and hysterectomies. This report also recommends UCP start charging long-term care patients, which also tend to be women, a co-pay on the pharmaceuticals they need while they are in the long-term care home and have no ability to earn extra income. The UCP also proposed a bill that would have severely restricted the reproductive rights and health care of women in Alberta, with their physician conscience rights bills.

Women workers in the health care field are also contending with a number of cuts and attacks from the UCP government. Many healthcare workers, who are predominately female, have already lost their jobs or have been threatened with wage roll backs and layoffs. The unilateral changes the UCP have made for how physicians can bill disproportionately impacts family doctors, a group that  is the fastest growing area of medicine for women.

All of these cuts and changes make accessing quality health care in Alberta more difficult for women.

The UCP have cut a number of child care-based subsidies, including the Kin Care subsidy and the Stay-At-Home subsidy. These supports allowed caregivers, who are predominately mothers, time to access part-time work or even education. Cuts to the Kin Care subsidy also have a ripple effect to the family members who would provide child care by effectively cutting their wages – many of these family members tend to be women in our communities.

The UCP continued their cuts against women by cutting a pair of programs meant to support child care centers and child care workers in Alberta – the Benefit Contribution Grant and the Staff Attraction Incentive programs. These kinds of cuts disproportionally impact the majority of women workers in the child care sector and prevent their full economic security and participation in Alberta.

The first phase of $25/Day Child Care is also being eliminated by the UCP government. This cut effects a number of different women. First, the actual daycare providers, who are predominately women, are losing a number of supports and professional development opportunities that enabled them to provide quality care for children. Second, the actual families that rely on this program for child care will now pay around $9,000 more per year or be forced to have a parent stay home to provide care – often mothers are the parents that end up exiting the labour force in order to provide care for children. By having mothers exit the labour force, against their wishes, the UCP are slowing down Alberta’s economic recovery which impacts all Albertan families and businesses.

The UCP have also drastically cut the funding for other Children Services programs, such as Parent Links, that serve predominately female populations by providing new parent support groups, early child intervention, and parenting classes, among other supports. For a number of families this means greater isolation and fewer supports for the large population of women who are the primary caregivers for children. The staff at Parent Links are also predominately women and their employment is directly affected by the UCP changes. Parent Link centers in Airdrie, Cochrane, Sturgeon Country, Wetaskiwin, Rimbey, and Medicine Hat have already closed, cut staffing or are planning to cut back their programming in response to the UCP cuts.

The UCP are cutting some of the most fundamental supports that women in Alberta have for child care so they can be employed, go to school, and participate fully in our economy. These women are pivotal to Alberta’s economic growth and are being left behind by these thoughtless UCP policies and cuts.

Women’s Right to Aging with Dignity

The UPC have also cut programs and policies that help Alberta’s seniors.  Since women make up the majority of seniors in Alberta, especially as the population ages, women are once again disproportionally impacted by these changes. The UCP have cut drug coverage for dependents under the Senior Drug Benefit Program, and most dependents of seniors are often their younger female spouses. For the women in Alberta who are seniors, they face substantial increases for their transit passes as municipalities attempt to deal with deep cuts to their budgets as well. The UCP also cut the Alberta Seniors Benefit by de-indexing the benefit.

All Albertans have a right to aging with dignity, but the UCP are failing Alberta’s seniors with their reckless changes and cuts to programs affecting this already vulnerable population.

This is far from an exhaustive list and only the beginning of the UCP attacks on women. The UCP has been in power for less than one year. These UCP attacks are also more complicated when we consider the different dimensions of inequality and vulnerability that people live with –  such as gender, class, ethnicity, ability, and sexuality – that can compound and interact together. And while today we highlight women and the important role they play in our society, we also understand that many other folks have been harmed by the UCP’s reckless cuts and changes including Albertans with different abilities, non-binary, and racialized people. While we have much to celebrate on International Women’s Day, the short track record of the UCP in Alberta make clear that there is still a very long road ahead before all people in Alberta will have equality in social, economic and political realms.