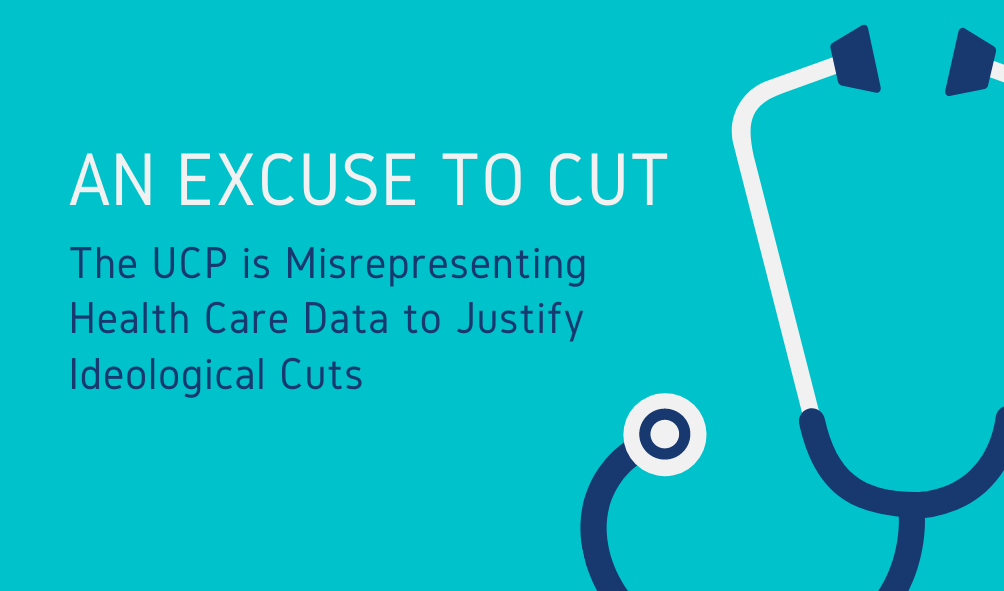 The UCP government recently announced that data from the Canadian Institute of Health Information (CIHI) supports their decision to pick a fight with Alberta’s physicians, which they have continued even during an ongoing global health pandemic.

However, when we took the time to look into the data ourselves, the UCP version of the story does not hold up.

According to the UCP, Alberta spends 15% more per capita on physicians than the national average. The CIHI data confirms this, that the gross clinical pay for full-time work for all physicians in Alberta was about 16% higher than the average in other provinces.

A fact that is true for all workers in Alberta, from health care, to construction, to our politicians we are a better paid province overall.

However, there is significant variation by specialty when it comes to physicians.

The UCP glosses over an important point that is clear in the CIHI data; that Albertans are getting more access to physicians, particularly GPs, compared to other Canadians. In terms of service utilization, Alberta physicians provide Albertans with 12% more services per 100,000 population than physicians in Canada as a whole.

Family doctors, the ones that seem to be the most under attack by the UCP and their health care-cutting policies, actually provide Albertans with 34% more services per 100,000 population compared to other family doctors in Canada. Looking only at the number of consultations and visits, leaving out any medical procedures, family doctors/GPs in Alberta provide 42% more services per 100,000 than what people get in Canada as a whole.

The UCP also claims that Alberta has an abnormally high number of physicians and that this number is growing too fast.

From 2015-2019 Alberta saw their physicians increase by just under 12% (11.8%). This is factually correct, but the headline from CIHI’s news release (“Over the past 5 years, the growth rate in the number of physicians in Canada has more than doubled that of the population”) demonstrates Alberta’s growth rate is in no way anomalous.

When looking only at the number of family doctors/physicians/GPs per 100,000 population, it is obvious that Alberta is pretty much in the middle of the pack.

Also, the proportion of physicians working in rural Alberta is close to the proportion for Canada as a whole, so we are not out of step. More work needs to be done across Canada in this area.

The rural physicians currently working in Alberta do not deserve to be relentlessly attacked and undercut by the UCP. These ongoing attacks are severely harming the effort to find and retain rural physicians with doctors in many communities deciding enough is enough.

It is clear that the UCP government is trying to mislead Albertans in an attempt to justify their ideological attacks against doctors and cuts to our public health care. They even took the time to go through CIHI data to cherry pick bits of data, misrepresent the numbers, while purposely leaving out context - all in an attempt to find confirmation for their deeply ideological approach.