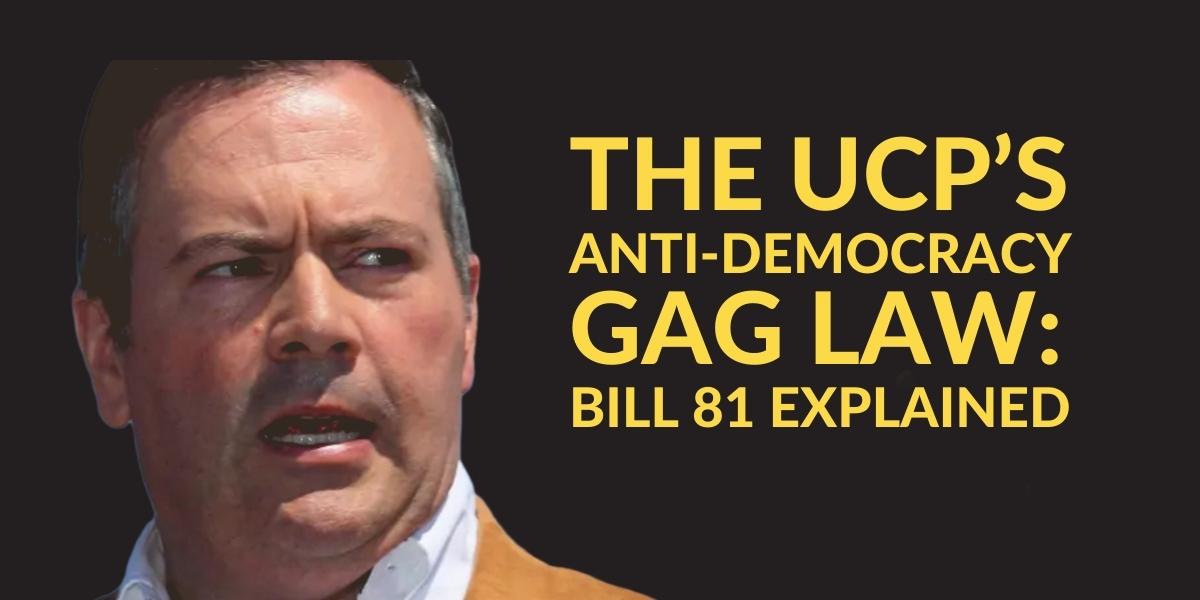 Due to overwhelming public and internal opposition, the UCP government amended Bill 81, the Election Statutes Amendment Act, and passed the legislation in the early hours of December 7, 2021.
Changes to Bill 81 include:

Even with these changes, Bill 81 is still dangerous for Alberta's democracy. It still amounts to a gag law targeting the AFL in particular, and unions and civil society groups in general. The UCP government changed the election rules in its favour in a cynical and underhanded attempt to try to win the next election.

With Bill 81, the UCP gag law still takes away the voice of working people by making it illegal for the AFL to engage in political advertising. Even though the AFL has always complied with Alberta’s election laws, the UCP allege that we “pour millions, tens of millions of dollars, into funding the NDP campaign.” To be clear, this has been illegal since the NDP government banned union and corporate donations to political parties – and the AFL has followed the rules to the letter.

With Bill 81, the UCP gag law still disallows unions or corporations from running political advocacy during an election: only individual Albertans can contribute to a third-party advertiser (TPA). This shuts unions and civil society out of election advertising, while leaving the door open to American-style political action campaigns (PACs) run by groups of wealthy individual donors.

The UCP’s contribution cap to TPAs was unchanged when Bill 81 passed. The $30,000 limit is designed to stifle unions’ involvement in political advertising.

Albertans can be forgiven if they haven’t heard of the United Conservative Party’s (UCP) Bill 81, the Elections Statutes Amendment Act, 2021.

It’s a rather dull name, to be sure, but if you look beyond the bland title, it becomes clear the aim of Bill 81 is two-fold. In the lead up to the next election, the UCP wants to silence dissent in Alberta, specifically criticism of the UCP government, while at the same time opening the floodgates of big money to the UCP’s bank accounts.

Bill 81 is an undemocratic and unconstitutional attempt to restrict the ability of civil society groups, including unions, from paid political advertising campaigns, which will seriously hamper their ability to criticize the UCP government.

The legislation will outright ban the Alberta Federation of Labour (AFL) from paid political advertising because we have been a very vocal critic of the UCP’s public service cuts and anti-worker legislation. Since Jason Kenney is scraping the bottom of public opinion polls, it appears they are doing everything they can to tip conditions in their favour for the next election, even bringing in laws that go against the Canadian constitution.

This UCP gag law also changes the legislation to allow for unlimited donations during nomination contests. This could lead to unlimited amounts of dark money to be funneled into political parties.

Why does the UCP want to ban the AFL from advertising?

Fighting for Alberta’s working people is in our DNA. This is why the UCP wants to shut us down.

The Alberta Federation of Labour is a voluntary association of unions and employee organizations that banded together to achieve common goals.

We formed in 1912 when unionized miners and other tradespeople organized to fight for better conditions for working people, their families and their communities. We formed to end child labour and establishing occupational health and safety regulations.

Since the UCP government, led by Jason Kenney was elected, we renewed our fight for Alberta’s working people. We launched our Stand Up to Kenney campaign to push back against the UCP’s cuts to public services, like health care and education, cuts to the minimum wage, cuts to occupational health and safety standards, cuts to WCB benefits, and more.

In the past, along with many others, we had a campaign for universal child care. And currently, we are advocating for paid sick leave for all Alberta workers and demanding Kenney and the UCP bring back mental health support for frontline workers.

Because of the nature of Facebook and digital campaigning, all of these campaigns use paid advertising and the UCP’s gag law is going to limit how we get the message out.

Unions and civil society shut out of election advertising

Currently, any group that wishes to spend more than $1,000 on political advertising must register with Elections Alberta as a third-party advertiser (TPA). These groups are listed on Elections Alberta’s website. Many groups from different political perspectives have registered to advertise, including unions, corporations, and civil society groups.

The UCP’s gag law contains a clause that only “a person ordinarily resident in Alberta” can contribute to election advertising. This means only individuals can pay for election advertising, so any groups like unions or corporations will be banned from political advertising during elections. (44.2(1) on page 140 of Bill 81)

Affiliation with a political party, targeting the AFL

The UCP’s anti-democracy gag law directly targets the AFL with a new section that prohibits any group that is “affiliated” with a political party from spending on political advertising, not just at election time, but at any time.

We do not share financial or other resources with the Alberta NDP.

The AFL is a frequent critic of the UCP government led by Jason Kenney, that’s why the UCP wants to silence the Alberta Federation of Labour. The UCP’s gag law will make it illegal for the AFL to pay for political advertising because we are named in the Alberta NDP’s constitution.

This will undermine our freedom of expression, which is enshrined in the Constitution of Canada. Other groups could also be banned from political advertising even if they are not named in a party’s constitution.

The UCP’s anti-democracy gag law also contains a chilling new broad definition of affiliation. Aside from direct affiliation with a political party, such as the AFL’s case, groups could be labelled “affiliated” by simply saying positive or negative things about a political party or candidate.

If Elections Alberta says your group is “affiliated” you will be banned from paying for political advertising once the UCP’s gag law passes.

Similarly, if a group in Alberta says positive things about a political party or candidate, it could be banned from political advertising because of the supposed “affiliation.”

This guilty-by-association definition of affiliation will mean groups could be banned from political advertising simply based on public statements.

Some unions engage in political advertising to get a better contract for their members, or to fight for improved working conditions for all workers, as well as, other social justice causes.

The UCP’s gag law will also put a $30,000 limit on contributions to political advertising campaigns per year. This will hamper unions.

Unions, by their nature and structure, use collective action to bargain for better wages and working conditions for their members. Members pay dues to the union; the union may then use the funds to pay for political advertising. All of this is legal and a normal activity in today’s political world.

For example, the Health Sciences Association of Alberta (HSAA) is registered as a third-party advertiser (TPA) with Elections Alberta.

The UCP’s gag law will limit contributions to TPAs to $30,000 a year. This means unions like the HSAA would be limited to assigning only $30,000 a year to a campaign. HSAA is the only contributor to its campaign, so this will severely limit the ability of the union to advertise.

This will undermine unions freedom of expression, which is enshrined in the Constitution of Canada.

Opening the door for unlimited money from secret donors

So, where will the extra money go?

It will be funneled back into party or constituency association accounts. This is a sneaky way for parties like the UCP to get around rules around contribution limits and transparency.

In other words, this is a way for the UCP to raise unlimited amounts of money from their big-business backers.

All of this is bad for democracy

The UCP are deeply unpopular in Alberta right now. Like a cornered animal, the UCP is dangerous and unpredictable. They are using the Alberta Legislature as a weapon to punish enemies and silence dissent in a cynical attempt to re-elect UCP Leader Jason Kenney as Premier.

The UCP’s gag law will not only silence dissent, it will also give them a way to raise huge amounts of money from big business.

All of this is bad for our democracy.

The UCP is trying to silence working Albertans. We need your help to fight for a better Alberta. The fight against the UCP’s gag law is about the kind of province and country we want to live in.

Join our campaign to stand up to the UCP’s anti-democracy gag law.