Analysis shows UCP plan will not create jobs, or increase GDP or revenue

Based on as much magical thinking as has been seen this side of Hogwarts, the United Conservative Party has released the core of its economic strategy for Alberta – a reduction of one third in the province’s corporate tax rate.

So far, pretty straightforward. But here’s where the magical thinking comes in. According to the UCP’s leader, Jason Kenney, that $1.75 billion tax cut will generate a $12.7 billion increase in Alberta’s GDP and 55,000 jobs. And according to Mr. Kenney, it won’t even cost Albertans anything, because tax revenues will actually increase by $1.2 billion.

The problems with Kenney’s plan go beyond its likeness to these spectacular failures in the United States. The details just don’t hold up.

That claimed $12.7 billion GDP increase implies a multiplier effect – dollars of GDP impact per dollar of fiscal change – of 7.25. That is, frankly, preposterous. In general, corporate tax cuts are among the weakest forms of fiscal stimulus. That’s because there’s no direct impact – the tax savings don’t go directly into the economy, they go into corporate income statements – and the indirect effects are widely dispersed throughout the Canadian economy and beyond. Most economic models would put the overall multiplier effect for a corporate tax cut at less than 1, with a significant proportion of that indirect effect occurring outside Alberta. A generous assumption would be a multiplier of 0.8 with 40% of the impact inside Alberta and 60% outside.

That works out to a GDP gain of $560 million, or about 1/25th of what Mr. Kenney claimed. Using UCP’s math, the claim of 55,000 jobs turn into 2,200. But that’s only the beginning of the problems with the UCP plan, because the tax cut promise is presented without considering the fiscal context in which the promise is made – the UCP’s promise of a balanced budget.

In the context of a balanced budget, the UCP’s $1.75 billion corporate tax cut would have a significant negative effect on Alberta’s GDP and jobs. Because the cuts would inevitably be concentrated on public sector employment and transfers to people, there is essentially a 1:1 direct impact on GDP. Furthermore, because the money ends up in the hands of people, who are likely to spend it, and spend it in Alberta, the indirect effects are greater than those for a corporate tax cut and are more concentrated in Alberta. With an indirect multiplier effect of 1.5 and assuming 60% of the indirect effect is in Alberta and 40% outside, the overall negative multiplier effect of a spending cut is 1.9. That translates to a reduction in GDP of $3.25 billion and, using the UCP’s math, a loss of over 14,000 jobs.

So the estimated net effect on the economy of the UCP’s proposed tax cut in the context of its balanced budget commitment is a decline in GDP of $2.7 billion and a loss of nearly 12,000 jobs. 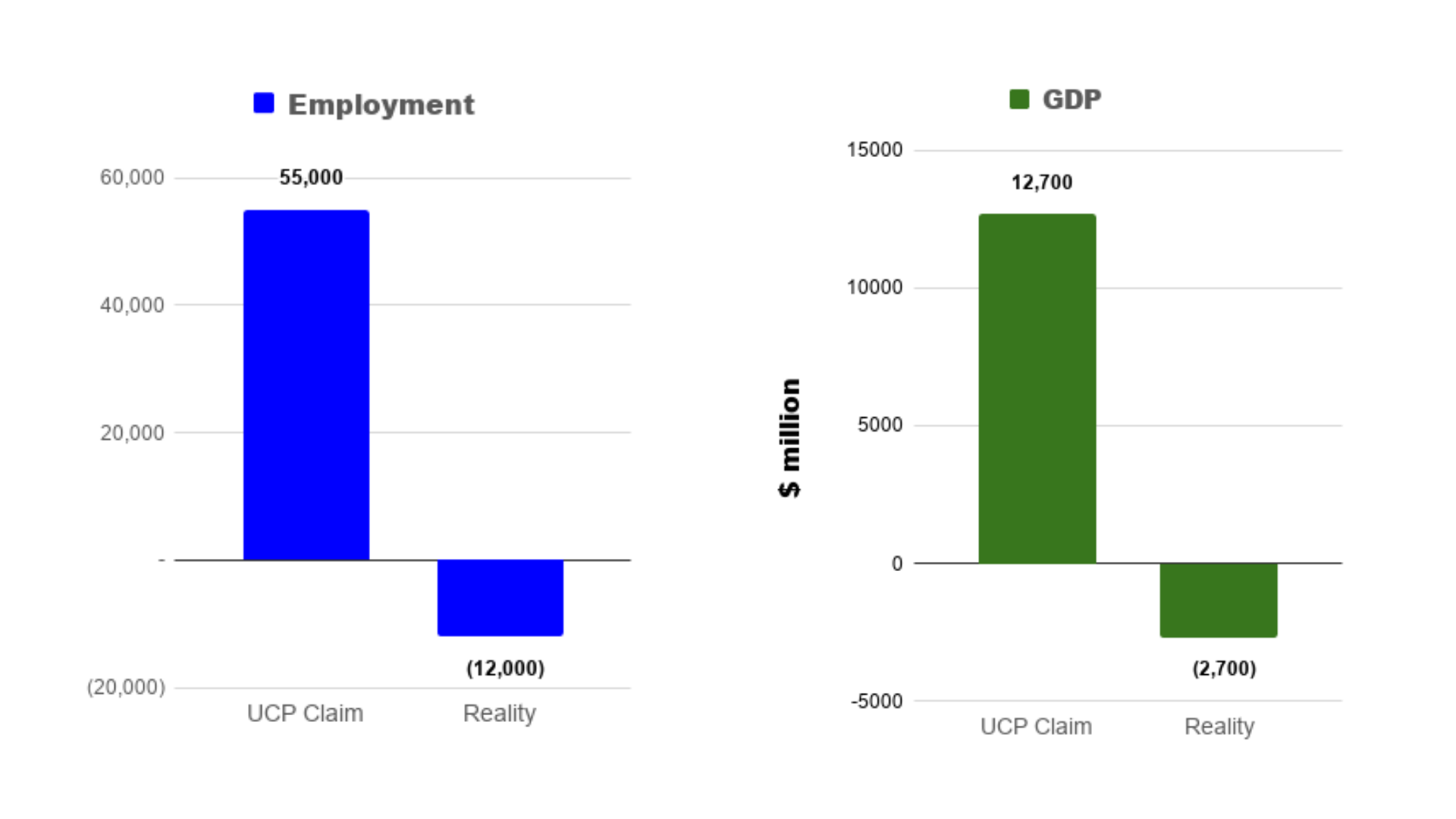 To complete the picture, the impact on revenue is sobering. The direct impact on revenue is captured in the loss of $1.75 billion in corporate tax revenue. But, again using the UCP’s math (an estimate that 1/10 of any change in GDP is reflected in provincial revenue) the net GDP loss would produce a further degeneration in provincial government revenue of approximately $270 million, for an overall negative impact of revenue of just over $2 billion. 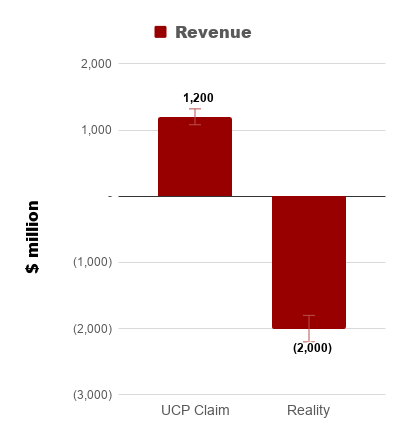 That result is consistent with the impact of similarly magical thinking about tax cuts, the economy and tax revenue in the United States under the administrations of Ronald Reagan, George W. Bush and, in spectacular form, Donald J. Trump.

In the context of an Alberta economy just beginning to recover from the collapse in prices for oil sands crude, that result would be a disaster.

About Hugh Mackenzie, Researcher / Spokesperson
Hugh Mackenzie is principal in an economic consulting business, Hugh Mackenzie and Associates, based in Toronto. In that capacity, he conducts research projects on economic and public policy and provides specialized support to unions and employee organizations in collective bargaining.

He has worked for over 35 years in a variety of capacities related to public policy development in the trade union movement, the private sector, and at all three levels of government and was part of the Alberta Premier’s Advisory Committee on the Economy.