In past work-related reviews, the Alberta Federation of Labour was consulted, even under conservative governments

EDMONTON – It is clear that the UCP government’s minimum wage ‘expert’ panel announced yesterday is stacked against workers and includes mostly restaurant lobbyists, critics of the minimum wage increase and workers who are relatives of restaurant owners.

The Alberta Federation of Labour was consulted in the conservative government minimum wage reviews in 1998 and 2005 which included input from the Alberta Restaurant and Foodservices Association (now the Alberta Hotel and Lodging Association) and the public. The results were the elimination of the youth minimum wage differential and increases in the minimum wage.

“We have little confidence that this panel will do anything but recommend lowering the minimum wage based on the restaurant lobby,” says AFL secretary treasurer Siobhan Vipond.

What is the point of a panel with a predetermined outcome? Especially since the UCP government already passed Bill 2, which lowered the minimum wage for youth workers without consultation. At the time Kenney was quoted as saying, “Look — 13 bucks an hour — that’s a heck of a lot more than zero bucks an hour.”

There have been studies showing no negative effects of increasing minimum wage on job numbers with some showing general positive impacts on the economy. A study last week reported New York’s $15 minimum wage has helped restaurants thrive. Alberta Labour Force Survey statistics indicate there is no evidence that minimum wage increases contribute to unemployment. 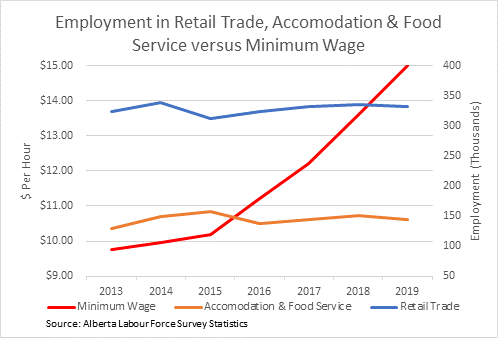 And a recent CCPA report shows even the current $15 minimum wage is much lower than needed to pay current rental costs.

“Minimum wage is about helping people afford basic needs based on cost of living and fairly compensating work. Not only are labour groups missing from this panel, but so are anti-poverty groups, women’s rights and student advocates,” says Vipond. “This government seems to be just interested in taking from the most vulnerable and giving to highly profitable corporations. A government should represent all Albertans.”

The Alberta Federation of Labour demands that it, anti-poverty and other groups that represent workers be included in this minimum wage panel.