UCP plan will lead to 60,000 lost jobs over four years

Edmonton– The Alberta Federation of Labour commissioned economist Hugh Mackenzie to provide an analysis of UCP and NDP platforms, with a special focus on employment impacts.

“Albertans are being presented with very different visions of public finances going forward,” said AFL President Gil McGowan, “cuts to public services will have employment and economic impacts that spill into the private sector.”

The report analyzes four scenarios: a base-case, the NDP fiscal plan, the UCP fiscal plan, and a transition to B.C. per capita spending (which Jason Kenney has identified as a goal).

Under the NDP plan, modest spending restraint would lead to a small negative employment impact. Public sector employment would decline by approximately 2,200 with a further indirect impact on the private sector of 3,300 for a total of 5,500 over four years.

The UCP plan, which hollows out government revenue with a large corporate tax cut, requires more than $7 billion in annual program spending to be cut by the fourth year of the UCP’s plan, in order to meet their goal of eliminating the deficit by 2023. The fiscal strategy proposed by Jason Kenney would cut employment in Alberta by nearly 60,000 over a four-year period, with 27,700 job losses in the public sector and 30,600 job losses in the private sector.

The UCP’s stated longer-term objective of reducing Alberta’s per capita public services investment to the level in BC would push job losses even higher, to a total of nearly 85,000.

To put it in perspective, the number of jobs lost under the UCP plan (58,000-85,000) would be higher than the number of jobs lost as a result of the oil price collapse of 2015-16 (when Alberta lost 50,000 jobs, net). The difference is that the economic crisis in the oil and gas industry was created by factors beyond the control of Albertans; the economic crisis that would be created by the UCP’s fiscal policies would be self-inflicted.

“Jason Kenney needs to come clean with Alberta on the impacts of his fiscal plan,” said McGowan. “The UCP plan would throw thousands of Albertans out of work, in both the public and private sectors, and plunge us into a second recession – call it a Kenney recession. And it would be entirely self-inflicted.”

“The last thing our recovering economy needs is massive cuts to vital public services,” concludes McGowan. “The drastic cuts proposed by the UCP are not actually required to manage Alberta’s fiscal deficit. Rather, these cuts are designed to achieve Jason Kenney’s ideological objective of shrinking government and reducing the level of public services provided to Albertans. If we go this route, we’ll have among the lowest levels on spending on public services in the entire country.”

Looking at the likely bottom-line impacts, it is clear that the point of the UCP’s fiscal strategy is not to address the deficit or debt, since the UCP’s stated debt load after four years of $86 billion is not far off from the NDP projection of $95 billion. The big difference between the NDP and the UCP is that the NDP will spend on people, while the UCP will spend on tax breaks for corporations. 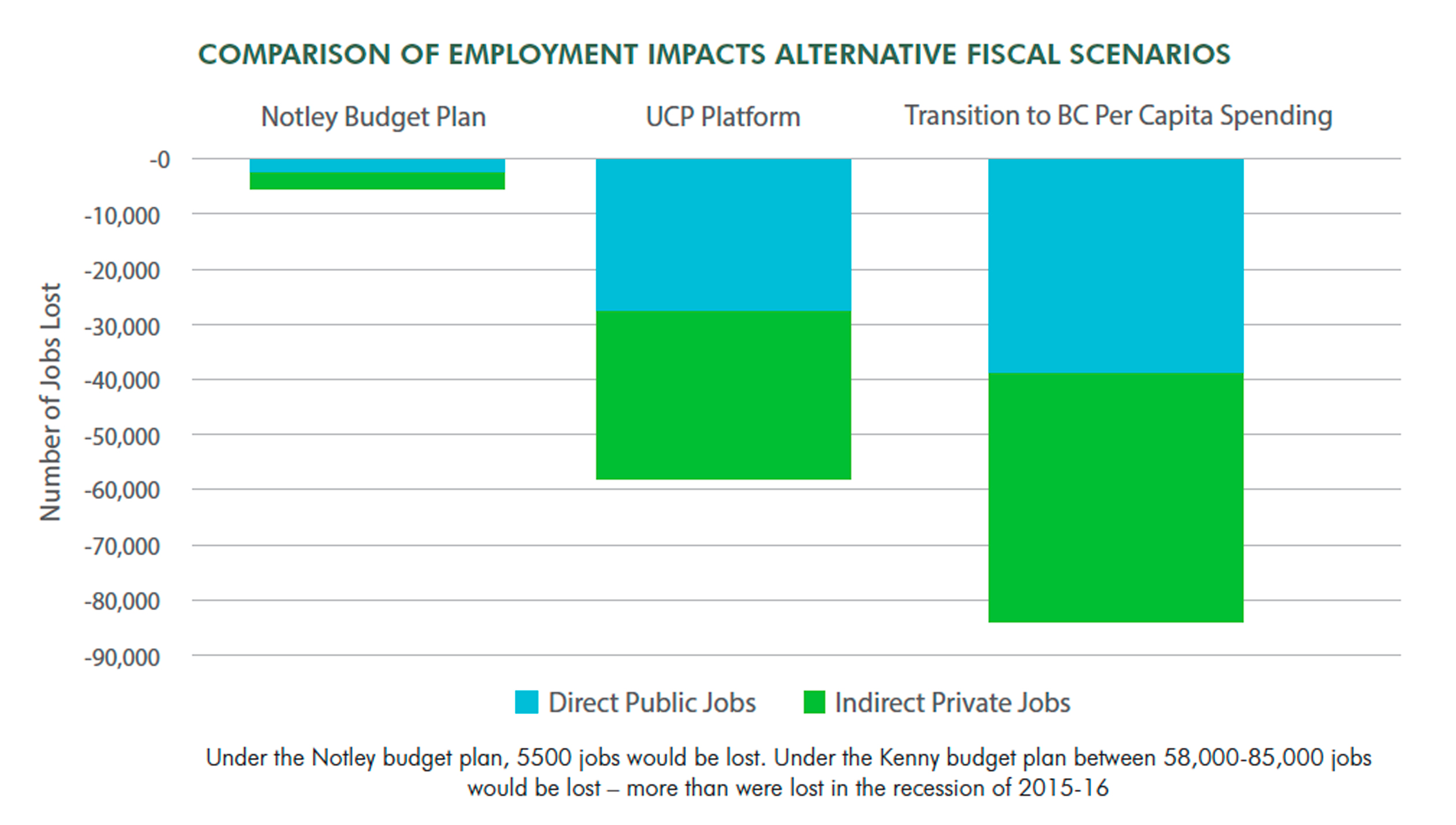 Public sector workers are our friends, family and neighbours and they make vital contributions to society and the well-being of our families, communities and businesses. The public sector is also a main driver of our economy, and a source of good jobs. In 2018, 274,100 people worked in the Health Care and Social Assistance Industry. The majority of the industry are women—nearly 82%. The Educational Services Industry employs 153,100 people, 70.7% of them women. Public administration, which includes government administrators along with occupations like police officers and firefighters, employs 102,400 people—with an even split between men and women in the industry. Holding the line on spending has ensured that these workers continue to be able to support their families and spend money in our economy.

The full report can be accessed here.