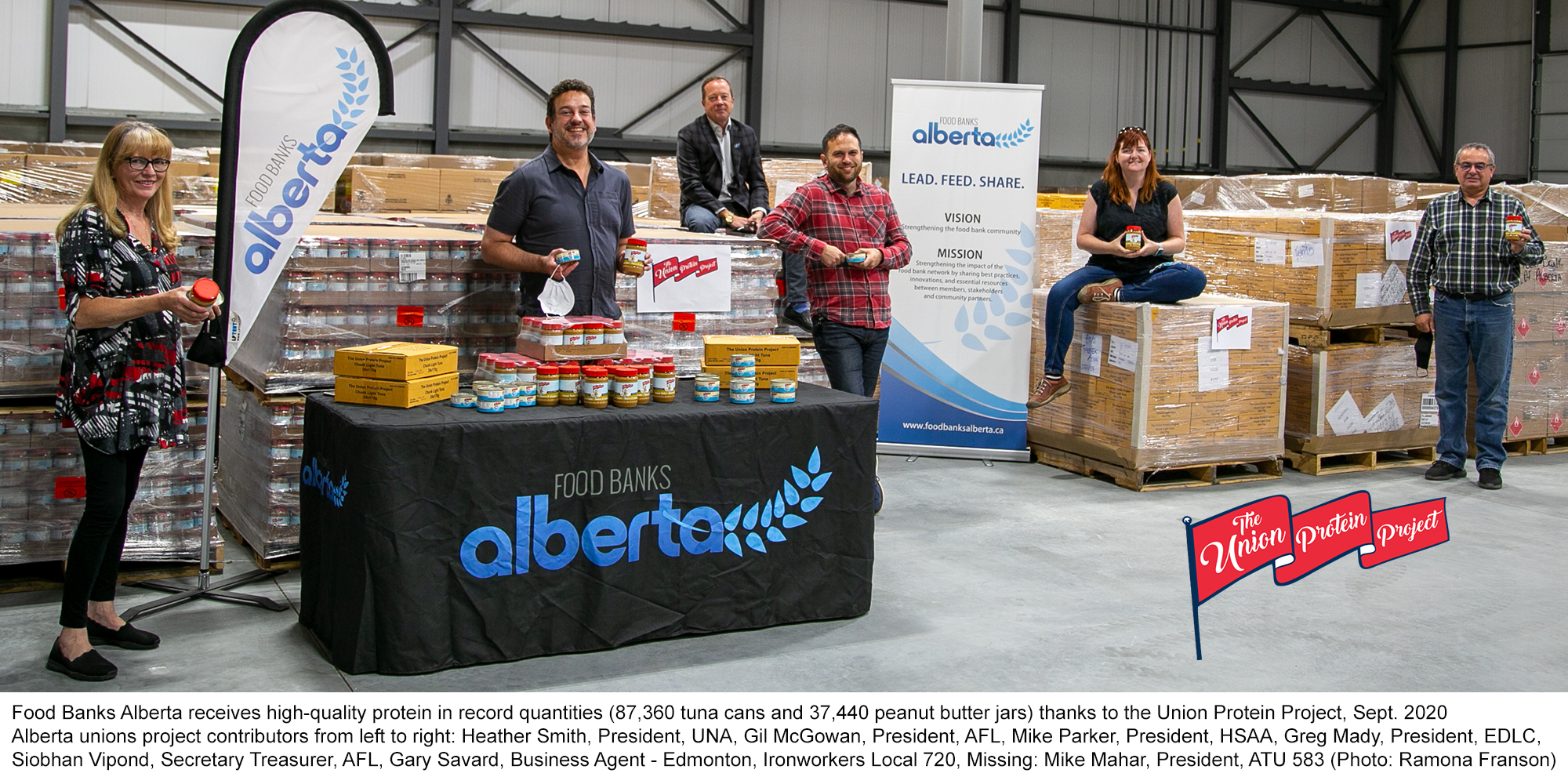 Food Banks Alberta, the provincial association of food banks in Alberta, recently received their 52 pallet order of 87,360 cans of tuna and 37,440 jars of peanut butter thanks to the Union Protein Project (UPP). Two truckloads delivered this high-quality, natural, shelf-stable protein, which can now be distributed to the almost 100 big and small food banks all across Alberta. The UPP, which has included the Alberta Federation of Labour (AFL) since 2018, is a non-profit society started by B.C. unions and the United Way in 2006.

“We are so grateful for this opportunity,” said Debbie Herman, Food Coordinator for Food Banks Alberta. “We would not be able to afford this high-quality, nutritious protein without this project."

The retail cost of this order would have been around $450,000 but because of subsidy donations from the Alberta Federation of Labour and affiliated unions, and the work of B.C. unions with producers and distributors, the order cost Food Banks Alberta $147,574, less than one-third of the price.

“The price is phenomenal, and it is such a cost savings for us and food banks but that’s only part of the piece, it’s really great nutrition as well. I can’t emphasize that enough, it’s cheaper for food banks because of the subsidies and it’s a better product than what we could get if we were to pay even the next closest price,” said Herman. “I definitely love the principle of this program and thought it was great when I got to know the high-quality product. I happen to be a natural food person myself, so it’s always been a bit disturbing to me, the empty calories that we sometimes feed to those who are most vulnerable in our communities.”

The work and generosity of many had to come together to make this delivery happen, especially during the COVID-19 global pandemic.  The Union Protein Project founder and former president of the United Fishermen and Allied Workers Union, John Radosevic and B.C. unions worked together to secure the product at a time when the supply chain was uncertain and demand high. Alberta unions added subsidies. Food Banks Alberta received donations from Food Banks Canada and other sources to be able to order and house the large shipments.

“I was thrilled when John called about the opportunity to place an order in April, and we ordered in May,” said Herman. “It is unprecedented because we have never been able to order and house such a large amount of product. It will now allow us to ship to smaller food banks around the province, whereas before, we could only share the shipments of whole palettes with larger food banks who could use the quantity.”

When the COVID pandemic hit, food banks became busy but had no ability to restock the shelves because of hoarding, so they had to stretch their supplies until this order arrived. Thankfully, while people accessed CERB payments, there was a slowdown in food bank demand. The order took much longer than expected due to pandemic shipping delays but Food Banks Alberta anticipates the future demand will be very high, with many more people out of work. Herman thinks this food will go a long way to get them through to the COVID-19 recovery period.

“Demand has been very high this year,” said Scott Lunny, president of the Union Protein Project, who also works with the United Steelworkers, “We’re at about 1.5 million dollars worth of product that we’ve been able to put into food banks in B.C. and Alberta."

“But this is what unions do, it’s about working together to do good,” said Lunny. “It’s a great example of what we can do when we put our heads together and put a bit of our resources and time together. What we achieve is really a high leverage from not a lot of financial commitment from any one individual union.”

In 2018, The Alberta Federation of Labour began a partnership to expand the Union Protein Project from B.C. to Alberta. The AFL Executive Council voted to donate $10,000 a year for the following five years to the Union Protein Project and the Health Sciences Association of Alberta union has matched that donation every year. The United Nurses of Alberta, the Edmonton and District Labour Council, the Ironworkers Local 720 and the Amalgamated Transit Union Local 583 have also contributed additional donations to the project.

“I want to give kudos to the AFL, to Siobhan Vipond and Gil McGowan who helped us coordinate in Alberta, because in B.C. we have an executive and unions that help us pull things together and in Alberta that’s really fallen on Siobhan and Gil,” said Lunny.

The slogan of the project is food security through good jobs.

“People should have food security through good jobs, said Siobhan Vipond, AFL secretary treasurer. “All people, working people especially, should not need food banks or live in poverty.  Wages are still too low and work too precarious for many Albertans. We want to do something about that problem, but in the meantime, there are food banks and people who rely on them, so we’re happy to be able to help supply this high-quality protein that Albertans using food banks would not have access to otherwise.”