What you need to know about the UCP’s undemocratic, anti-worker law

The newly introduced Bill 32, Restoring Balance in Alberta’s Workplaces Act is the UCP government’s undemocratic, anti-worker law that will enact sweeping regressive changes on Alberta workers and workplaces. It hits union and non-union workers alike with Labour Relations Code and Employment Standards Code changes. It also adds to the unconstitutional Bill 1, which will limit the ability of citizens to protest by also limiting how and where workers can picket.

It’s interesting that the UCP chose to name it “restoring balance” as it is clearly designed to take away workers’ benefits and rights and give to exploitative employers with the added bonus of silencing critics of this government. So, they must mean “restoring” the unfair advantage to corporations and the rich. This is a giant omnibus Bill that makes many changes but here are some of the key lowlights:

Unions are groups of workers, who fight for worker rights. Bill 32 is using a divide and conquer strategy to make unions seem like they are “the other,” that somehow take something away from workers. This is a common strategy among those looking to exploit workers.

Overall, Bill 32 seeks to damage the relationship between trade unions and their members and undermine workers’ ability to bargain. It’s also an effort to defund progressive campaigns that push for things like Pharmacare, Universal Child Care and speak out against Kenney’s cuts. It adds red tape and increases the involvement of the Labour Relations Board in day-to-day affairs, making strikes more difficult and limiting workers from picketing. Some of the amendments are likely violations of the Charter of Rights and Freedoms but as this government has shown, they are not playing by the rules.

Union workers know they already have access to their unions’ financial statements but this Bill will require the statements to be more public, shared with each member and the Labour Relations Board. You can see how the statements could easily fall into the hands of the employer, and if the employer knows how much the workers have in their strike fund, for example, it will undermine the union’s ability to bargain.  No one makes corporations do this.

This is an attempt to defund progressive campaigns and silence government critics. Bill 32 will require that unions determine the amount or percentage of the union dues are spent on “political activities and other causes” which means things like progressive campaigns that push for things like Pharmacare, Occupational Health and Safety, Universal Child Care and speak out against Kenney’s cuts and support charities, we’ll call this bucket A, and the amount spent on activities under the Code, including collective bargaining and representation of members, bucket B. Then, each member must choose to opt-in to have their dues support the activities in bucket A. Workers can always go to union meetings to have a say in which issue, cause or charity they wish their union to support, this is about silencing the critics of this anti-labour government. It will likely be found to be a violation of the Charter of Rights and Freedoms as it interferes with workers’ freedoms of association and expression but the fact that the UCP are trying to challenge constitutional rights is very disturbing.

The mandatory statutory timelines to complete a certification or revocation application have been removed.  The removal of these timelines provide employers much more time and opportunity to engage in unfair labour practices in an effort to get the employees to vote against a certification. There is no value to a reasonable employer in delaying a certification application, because all the parties benefit from a quick decision. The only reason to remove the timeline is to support the activities of less reasonable employers.

“Obstructing or impeding a person who wishes to cross a picket line from crossing the picket line is a wrongful act” is added to section 84 of the Labour Code. Picketing already is restricted in that it must be conducted without wrongful acts so this change appears to make it illegal to delay a person for even one minute at a picket line. Another change restricts workers from picketing at a secondary location, where the employer has moved the work to or the premises of employer allies to do the work unless they get permission from the Labour Relations Board.

The right to strike and picketing are constitutionally protected worker rights and this will also likely be found to be a violation of the Charter of Rights and Freedoms. There are already decisions of the Supreme Court of Canada stating that picketing generally and secondary picketing are protected Charter rights of freedom of expression and association. The fact that the UCP government wants to violate these rights is a bold attack on workers and democracy.

Overall, these changes are about tipping the scales in favour of employers, lowering employees’ pay and benefits and increasing a lower-wage workforce.

Kenney and the UCP seem very interested in child unemployment, so much so that they are willing to forgo some safety rules. In this Bill, the proposed changes will expand the types of jobs 13 and 14-year-olds are allowed to do without first needing a permit. Children are not lacking in menial job opportunities, it’s obvious Kenney and the UCP are increasing the workforce for corporations looking for low wage labour to maximize their profits, and with their new youth minimum wage, they’ll make below the minimum wage. Read our report on the youth minimum wage. 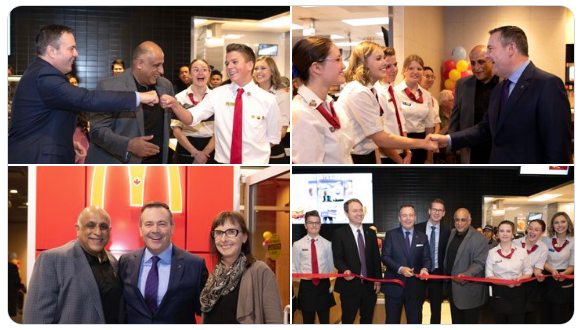 For non-union workers, there were changes to averaging agreements and averaging periods. Formerly called agreements, the changes allow the employer to require any worker they wish to have an averaging arrangement. These arrangements can now average hours out over 52 weeks whereas previously they were much shorter duration. This change could be particularly bad for workers in seasonal industries and those in workplaces that ramp up at particular times of year. Instead of an employer having to pay overtime for these workers for having them work over 8 hours a day, employers can use an averaging arrangement to average out the hours across 52 weeks to avoid all overtime pay. For workers in seasonal industries, this could mean the end of any overtime they would have seen in the past.

Other changes include employers no longer needing to give 24 hours notice for shift changes but rather, the employer can specify in an averaging arrangement the different timeline that works for the employer. The reality for some workers is that they have responsibilities beyond their workplace including caring for children, or elderly parents. The fact that the UCP is leaving notice periods up to individual employers to dictate is going to be particularly difficult for some workers to plan their lives around.

Other changes under the UCP include giving employers more time to pay termination pay for workers - which may result in some workers receiving their final pay after 31 days. This, in combination with getting rid of individual layoff notice periods, will be particularly difficult for workers who lose their jobs suddenly. The UCP also made changes to the way holiday pay is calculated, paving the way for employers to pick different formulas that allow them to pay workers less.

In the United States, workers have suffered a devastating loss of wages, benefits and working conditions over decades because of legislation just like Bill 32. It is clear that the anti-worker Kenney UCP government wants to lower worker wages and erode worker rights. And it’s clear we need to fight back.

As AFL president Gil McGowan has said, “This isn’t about ‘balance. It’s about silencing critics of the government. It’s about shutting down the ability of ordinary working Albertans to pool their money and run public advocacy campaigns on issues that matter to them.  It’s about weakening the bargaining power of workers, both in the workplace and on the political stage. And it’s about tipping the scales in favour of corporations and the wealthy at the expense of everyone else.”